Big ripples ahead as Spoon Street opens at Rushmere 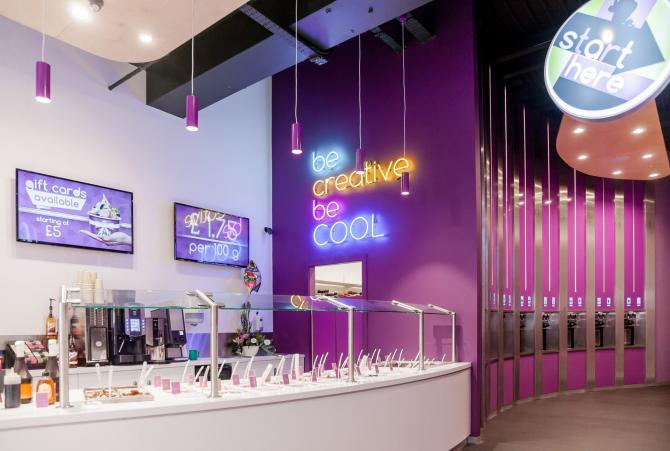 Created by young entrepreneurs Harry and Katie Wang who opened their first store in east Belfast in 2014, Spoon Street has since brought its US-inspired yogurt concept and eco-friendly credentials to three other Belfast locations including Anne Street, Lisburn Road, Lisburn Leisureplex and Ballyhackamore.

The Spoon Street brand was acquired by the Newry-based owner of restaurant chain Eddie Rockets, Justin Ward, in 2019.

The Spoon Street concept has proved a big hit with customers who get to pour their own ‘froyo’ from a multi award-winning selection of 16 flavours and 45 toppings using biodegradable spoons, and all tastes are catered for with gluten-free, sugar-free, nut-free, vegan-friendly, vegetarian, low-fat and fat-free options all on offer.

Frozen yogurt and sorbets have grown dramatically in popularity as a healthier alternative to ice-cream in recent years.

Spoon Street director Justin Ward said Rushmere Shopping Centre was only the next stop in a new plan for growth.

“With four longstanding, successful outlets behind us, we’re already looking forward to growing our footprint further across the island as we look to restart growth plans paused as a result of the pandemic. Rushmere is a major milestone in this strategy and we can’t wait to reveal more details of new locations in the months ahead,” Justin Ward said.

Centre manager Martin Walsh said: “Since fully reopening in May with record-breaking visit numbers, Rushmere has been keen to add to its strong mix of retail stores and big brand names with a fresh focus on hospitality and I’m thrilled that the hugely-popular Spoon Street has chosen us as part of its new expansion plans.

Earlier this year, Rushmere Shopping Centre reported record daily visitor numbers for a May Bank Holiday weekend, when more than 136,000 customers made the trip.

Out-of-town retail centres and parks have performed relatively strongly compared with high streets and city centres in the last year and are recovering faster than any other type of shopping destination, according to a recent Springboard analysis.