Oktoberfest back in Belfast 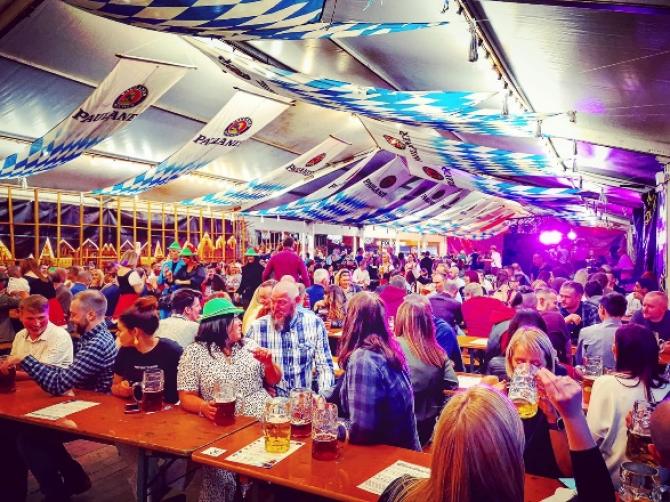 Everyone is invited to join the celebration of food, beer and music at this year’s Oktoberfest Belfast held in Custom House Square.

In 2008 Belfast first gave host to a small imitation of the Munich. The Merry Monk Tavern team have since brought the celebrations to Northern Ireland.

The events over the past 13 years have been a great success with sell-out crowds who enjoyed the great atmosphere presented by a well-balanced mix of traditional ‘OmmPaPa’ band and local entertainment. Oktoberfest Belfast had been held at The Kings Hall, Belfast until 2018. The closure of the venue forced the organisers to find a new venue settling on Custom House Square for the 2019 event.

The event continues to get bigger and bigger each year with more music, more food, and of course more beer. Backed by one of the biggest breweries in Germany, Paulaner, this year’s Oktoberfest Belfast 2021 sets to be bigger with every year becoming more popular. With 35,000l of beer ordered from Germany's Beer making capital it really is a fantastic event that brings a small slice of the German festival to Northern Ireland’s Capital.

The Munich Oktoberfest has been running since 1810 and now hosts six million people year on year that come together to celebrate everything German. It creates an atmosphere like no other and is one of the world’s biggest events.

After the success of the German beer tent at the Christmas market in Belfast, it’s no secret that the people of Northern Ireland love good quality German beer. Oktoberfest in Belfast offers the full German experience with quality beer, music and food. It really is set to be a great way to soak up the atmosphere of the great Munich festival without having to fly over 1,000 miles.

Oktoberfest Belfast 2020 held in Custom House Square Belfast will have a full range of beers to meet your palate, including Paulaner Oktoberfest Lager which is only brewed for the Munich Beer Festival. All the food and beer will be delicious and served by friendly staff in traditional Bavarian costumes. As is tradition in Bavaria the beer will be served in 1 litre glass (steins).