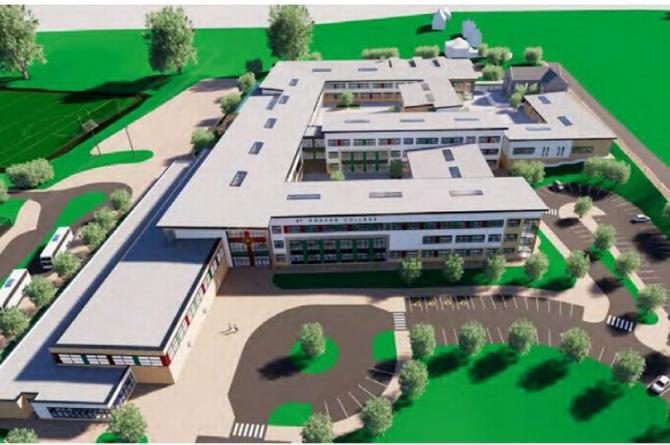 Sinn Féin MLA John O’Dowd and Council Group Leader Liam Mackle have said the new build for St Ronan’s College will be built despite this week’s set back.

The Sinn Fein pair committed their party support to overcoming the issues which have seen the contract for the new build having to back out to the market.

Last week Your Lurgan exclusively revealed that hopes of a new school building for St Ronan’s College opening by 2023 had been dealt a hammer blow after the procurement process to appoint a contractor was withdrawn.

The Department of Education, which said the decision was due to “the current market uncertainties and following legal advice”, told this website that a new procurement process will get underway.

Mr O’Dowd said the news was “a setback, not a cancellation of the new build, events beyond the control of the school involving the escalating costs of building materials on the global market have meant the project will be delayed.

“The school, like many other building projects, got caught in the storm, but there is a road map out of this and the finances are available to build the new school.

“Legal factors meant the contract will have to back out to the market, that will cause a delay to the project but the new school will be built.

Cllr Mackle said: “Like many in the community I was deeply disappointed to learn of the delay to the new St Ronan’s school.

“However; as political leaders it was only right we established all the facts before commenting,  and after engaging with the leadership team in St Ronan’s and the Dept of Education we are now confident solutions are on the table.

“Sinn Féin will support the St Ronan’s school community to ensure the new school build is delivered and this set back can be put behind us.”