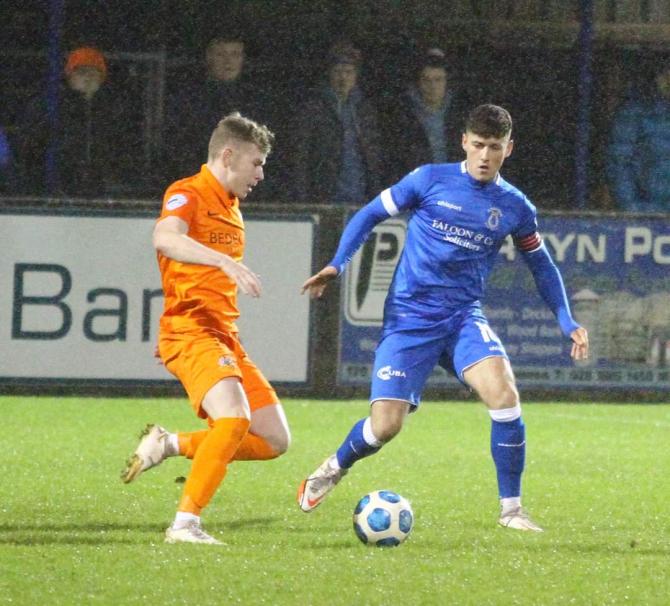 Peter Campbell, who found the net for Glenavon, in action at a wet Stangmore Park.

It was a much improved performance by the Lurgan Blues, who were forced to name Gary Hamilton on the bench after Calum Birney and Declan Brown were forced to pull out of the team.

James Singleton, who hadn't kicked a ball in weeks, started alongside Andrew Doyle, who "played through the pain barrier" according to Hamilton after the game.

A deflected Matthew Fitzpatrick shot was plucked up out of the air by Niall Morgan as Glenavon enjoyed the better of the opening exchanges.

And the ball was in the net on seven minutes after Campbell's cross was turned in by Waterworth, but the striker was just offside.

Andy Hall saw a great effort headed off the line by Ethan McGee after a Michael O'Connor corner was cleared as far as the winger.

Joe McCready was within a whisker if putting the Swifts in front just after the half hour mark when an inviting cross evaded everyone, with the big striker unable to stretch far enough to reach the ball.

A short time later James Taylor came to the rescue with a low diving save following a rasping shot by Ryan Mayse.

Five minutes from the break O'Connor had a crack at goal with a curling free kick which was pushed away by the Swifts' goalkeeper.

Waterworth put the Lurgan Blues in front two minutes into the second half, heading in a free kick from the left by Campbell. Danny Wallace may have got the faintest of final touches but on first viewing the goal belonged to the striker.

Ten minutes later Waterworth almost had a second, but his deflected shot came off Caolin Coyle and into Morgan's arms.

With 78 minutes on the clock Campbell doubled Glenavon's lead, lifting the ball over Morgan and finding the net with a superb finish after a lovely ball had been played across by Matthew Snoddy.

Five minutes from time Sean Ward tried to get in on the goalscoring action with a shot from the edge of the box but Morgan was equal to it.

The win moves Glenavon seven points clear of the Swifts who sit 10th, but the Lurgan Blues still have some catching up to do with their next opponents, sixth placed Crusaders, with a 12-point gap between the two sides.