'A Christmas Dream' comes true for MADS as group takes to the big screen! 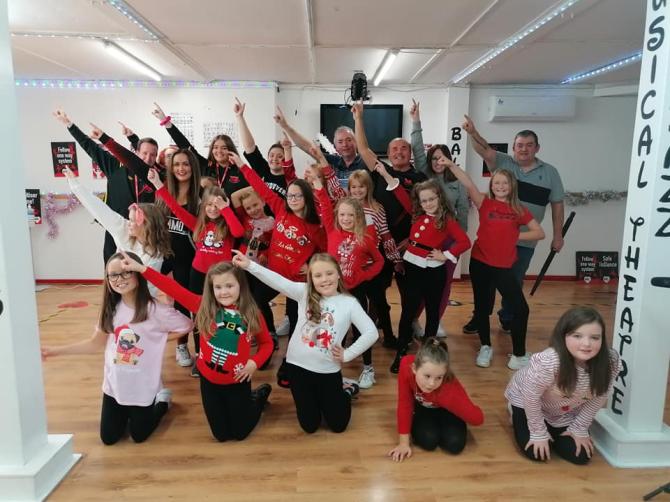 Young people - and some helping hands - pose for a picture at Miss Mac Dance Studio, where a scene for 'A Christmas Dream' was filmed.

Moyraverty Arts and Drama Society are bringing some Christmas cheer to the big screen!

The group has been working hard on their first ever festive film, 'A Christmas Dream'.

And the red carpet will be rolled out when the movie receives its premiere at Craigavon Civic Centre next Saturday, December 18.

Kieran Corr, MADS Chairman, is expecting a sell-out. At the time of speaking to Your Lurgan, only 40 tickets remained for the premiere.

It's the first time that the group has ever done something on this scale, as Kieran explained.

“We normally put on musicals – unfortunately we haven't got doing one for over two years now,” he said.

“We wondered what we could do differently due to the COVID restrictions, so we decided to do a film. It just snowballed.”

As you'd expect from the show's title, the musical theatre-based film has a Christmas theme throughout.

Kieran explained, “The lead girl is Sophie Doyle for Aghagallon. She plays an 18-year-old who wants to go to a performing arts school in London, but her parents are both solicitors in Lurgan.

“They want her and her twin brother to go to law school, but her dream from no age was to become a theatre star, act in the West End or Broadway.

“It's really her confrontation with her parents, especially her mum, to try and get her to change her mind to let her go for an audition to try out.

“She has four friends who are about 17 or 18 who back her up and help her – she goes to a recording studio to record a song, for example.”

Without giving too much away, the turning point in the films comes at scene recorded at MADS' Christmas ball last year in the Corner House.

“We started filming in September so we've had Christmas decorations up since then for some of the scenes!” added Kieran.

“There's a cast of about 150 including adults, guests and extras so we're quite pleased with it. We shot scenes in Cosy Coffee, Cafe Vibe, Shear Experience, Perfect Day and Miss Mac Dance Studio. There's a scene in Lismore too. Everybody has been brilliant.

“The Lord Mayor of the Borough actually makes a guest appearance too, switching on the lights in the Civic Centre for us.

“Paul Heaney, who organises the Armagh TV, has been our cameraman and he has been brilliant, and Johnny Magennis has written a couple of original songs for us too which appear in the film.”

MADS turns 25 in 2022 and some familiar faces from the group's early days have returned for a starring role in the film.

“The mummy of the lead girl in the film, Laura Haddock, was in the lead role for us in The Sound of Music and Les Miserables way back in the early noughties and now she's in this film with her three daughters!

“Johnny, who wrote the songs for us, his daughter is in it and there's a few other old MADS members in it along with their children.”

Delighted with how the group has grown over the years, Kieran, who is the founding member of MADS, added, “It's great to see the confidence that it gives the young people.

“It doesn't matter what talent they have or if they have no talent. Everybody can sing, dance or act to a certain level.

“Our objective from the word go has always been that if somebody wants to be in our shows, they're in it. Obviously you have to pick someone who is strong to be in the lead roles, but it's not a case of 'oh sorry, you're not good enough'. Every child gets performing, that's always been our number one objective.”

Tickets priced at £10, which includes a wine reception and juice and popcorn for children, are on sale now but are going fast. To get yours click here.