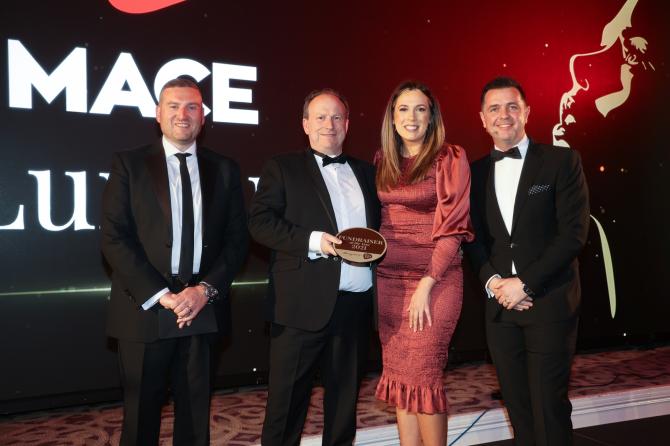 Receiving the award for Fundraiser of the Year for charity partner NI Chest Heart and Stroke is Anthony McDonald of MACE McDonald’s in Lurgan.

A Lurgan shop has been hailed for its fundraising after being commended at the Musgrave Northern Ireland Store of the Year Awards.

Back for the first time since 2019, the event saw Musgrave NI celebrate and recognise the achievements, hard work and dedication of its retail partners across the SuperValu, Centra and MACE retail brands.

MACE McDonald’s Lurgan scooped Fundraiser of the Year for charity partner NI Chest Heart and Stroke for the second time. The Lurgan MACE store was also runner up in the MACE Store of the Year Small Format category (under 1,800 sq ft).

Other notable news involving County Armagh stores saw SuperValu Wilson’s Portadown was crowned Newcomer of the Year while SuperValu Fruitfield in Richhill owned by the Woods’ family, was one of three finalists in the SuperValu Store of the Year award.

Congratulating all the finalists, Trevor Magill Managing Director of Musgrave in Northern Ireland said: “The Musgrave Store of the Year Awards are a part of a continuous drive to maintain the highest possible standards across our retail brands.

“We were delighted to hold the event once again and are proud to recognise the hard work and dedication of our retail partners as well as our Musgrave owned stores from across Northern Ireland, who are redefining convenience retail.

“Our stores are at the very heart of communities across Northern Ireland and are dedicated to delivering the best in customer service. I thank all of our retailers who work tirelessly to set themselves apart from competitors through hard work, passion and commitment to excellence.”

The awards, which were hosted by radio presenter Pete Snodden and held at the Slieve Donard Hotel, showcase and recognise all of Musgrave’s retailers in Northern Ireland across the SuperValu, Centra and MACE brands. Finalists are selected following several rigorous rounds of performance and standards audits, with the highest accolade being ‘Store of the Year’.