We will act accordingly to the mandate given: Lockhart 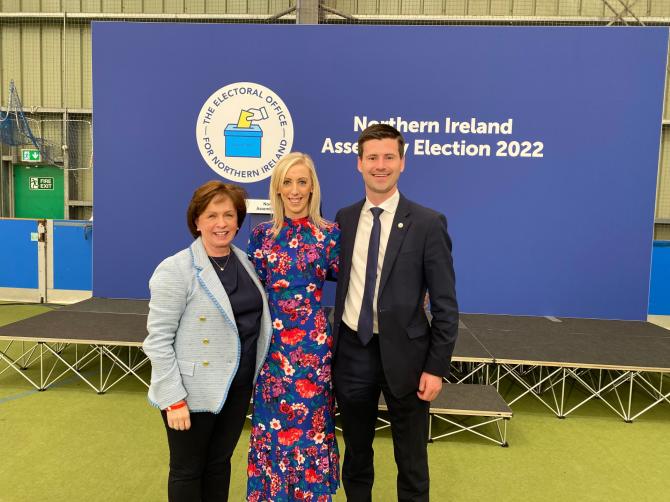 Upper Bann MP Carla Lockhart has said that the clear mandate given to Jonathan Buckley MLA and Diane Dodds MLA would be acted upon, both at Stormont but also through hard work and delivery for local communities.

Thanked all those across Upper Bann who took time to vote DUP last Thursday, Ms Lockhart said, “The DUP stood on a clear platform: the Government can have the Protocol or a Northern Ireland Executive – it cannot have both.

"With the vast majority of Unionists rallying behind our message, and with further unionist votes for those also demanding an end to the Protocol, it is incumbent on the Government and the EU to act to remove the Irish Sea Border.

"The Protocol can be resolved this week if there is the will to do so. Intransigence from the EU, and obfuscation from the Government, will achieve nothing but stalemate.

"The economic integrity of the UK must be restored, but so too must the very basis of the institutions at Stormont in terms of cross community consent. The Protocol has no consent from Unionists, and whilst Republicans and the Alliance Party arrogantly dismiss the clear message from Unionism, we will hold fast to the promises we have made to the electorate.

"The DUP want a new Executive to be formed. We have always been committed to devolution and will take no lectures from those who tore down the institutions for their own narrow political agenda or those who rolled in behind them to bolster their preconditions to re-entering Government. They feign concern now about waiting lists and those struggling with household bills, yet for three years they prioritised Irish language legislation whilst waiting lists soared, and more and more people relied on food banks. Their hypocrisy is not lost on most people.

"In the meantime, I know that the mandate given here in Upper Bann to my colleagues Jonathan Buckley and Diane Dodds will ensure their hard work as part of the local DUP team will continue. Our focus is on delivery for the people here in Upper Bann, and we are extremely thankful for the votes given to the DUP, and for those who transferred to us as well.

"We are cognisant too of those who chose to vote for others instead of the DUP. The message given has been received loud and clear and will not be ignored."

"Politics is a difficult path to take, and I also wish to pay tribute to Dolores Kelly who lost her seat here in Upper Bann," she said.

"Whilst our political viewpoint is starkly different, I have worked with Dolores on many issues through the years. I wish her well in the next chapter of her life.”