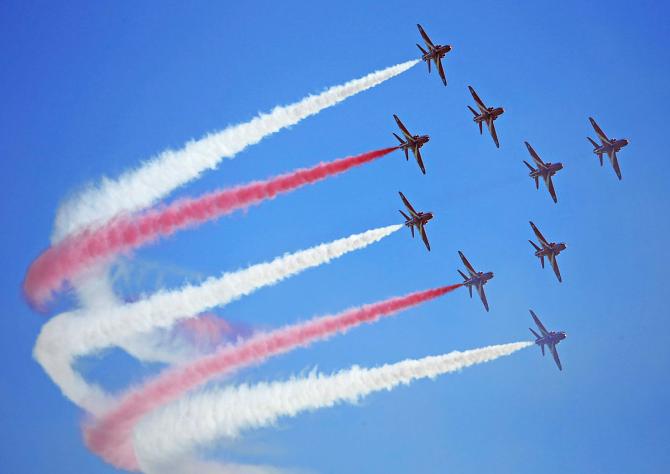 The world’s premier aerobatic display team, the RAF Red Arrows, will stage a flypast over Banbridge at 12 noon this Saturday, June 18, as Armed Forces Day is marked in Northern Ireland.

This will be the Red Arrows first appearance in Northern Ireland during this special Platinum Jubilee year.

Come along and see the daredevil pilots jet into the County Down town in their distinctive Hawk fast-jets and showcase their breath-taking flying, trademark diamond nine formation and coloured vapour trails. They can be viewed from the town centre as well as Banbridge Rugby Club’s grounds.

The day gets underway with a Drumhead Service at Banbridge War Memorial, Newry Street at 10.30am followed by a parade of 500 strong of serving personnel, veterans and cadets and accompanying bands who will march to Banbridge Rugby Club – the venue for the military and musical spectacular.

The Band of the Royal Irish Regiment accompanied by the bugles, drums and pipes of the 2nd Battalion Royal Irish will bring the event to a spectacular close.

UTV presenter Paul Clark will compere and BFBS will be broadcasting live from Banbridge Rugby Club.

No dogs are permitted in the grounds of Banbridge Rugby Club. The free car parks, located close to the town centre, will open at 9am and close at 6pm.

For full details about the event including the programme, free car parks and road closures, visit armedforcesdayni.co.uk.