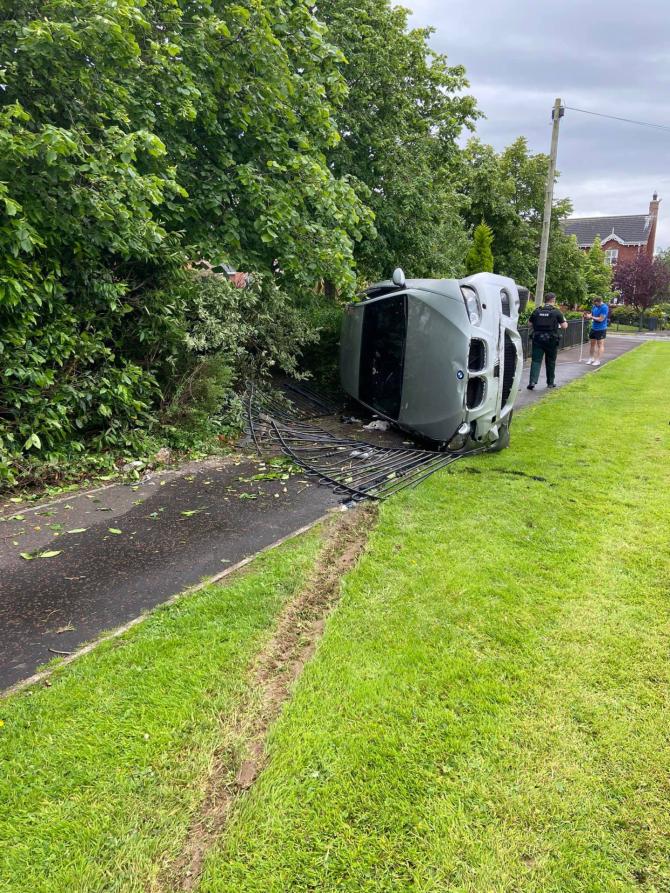 Police are appealing for information and witnesses in relation to a report of a single vehicle road traffic collision in the vicinity of Gannon Lodge in Donaghcloney.

The incident took place shortly before 11.55am today, Thursday, June 16

Sergeant Innes said that a report was received of a collision involving a silver BMW.

“Extensive damage was caused to metal railings in the area. It was reported that the occupants of the vehicle, understood to be one female and two or possibly three males, made off from the scene in the direction of Donaghcloney village,” Sergeant Innes added.

“The female was described as having ginger hair, and dressed in a striped top and a hoodie. One of the males was described as being possibly in his 20s, approximately 5’ 5 or 6” in height, of a slim build, with short fair hair. He was said to be wearing a grey T-shirt and jeans.

“A second male was described as being of stocky build, with ginger hair, and was dressed in dark coloured clothing.

“Our enquiries into this incident are continuing, and we are appealing to anyone who was in the area at the time and witnessed it, or who may have captured any dash cam or mobile phone footage, to contact us and quote reference number 741 of 16/06/22.”

Local councillor, Alderman Mark Baxter, said he was “shocked" to learn of the accident this morning.

"I was contacted by numerous residents in the area who were all very concerned as to what might have happened," he said.

"The railing has been destroyed and the path is well used by people walking in and out of the village.

"I would appeal to anyone who may know of who was involved to contact police immediately.

"Thankfully no one appears to have been injured on this occasion," the DUP representative added.