Lockhart hosts Secretary of State on visit to Brownlow House 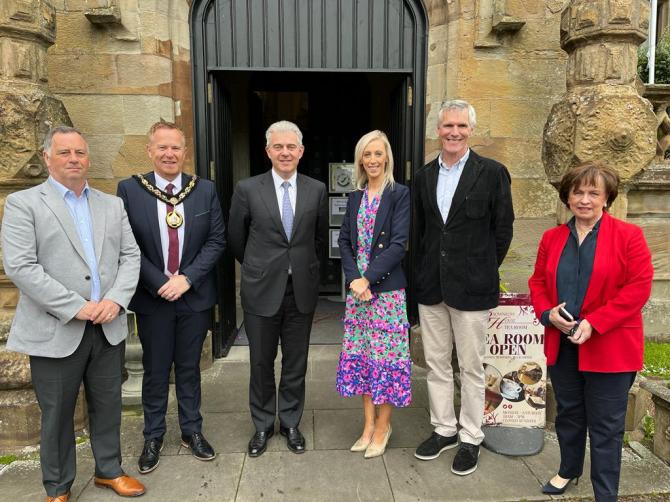 Upper Bann MP Carla Lockhart has welcomed Secretary of State, Rt. Hon. Brandon Lewis MP, to Brownlow House in Lurgan for a tour of the historic venue, and to discuss plans for the future development of the site.

Speaking after the visit, Carla Lockhart said: “Brownlow House is a jewel in the crown of Lurgan, not just in terms of hospitality but also in terms of tourism.

"The history and heritage of this landmark venue is without parallel in the locality. Brownlow House played its role in the World Wars and particularly in WW2 as it became a base for American troops. General Dwight D. Eisenhower (who later became President) visited Brownlow House and from here helped plan the famous D-Day landings.

"Under the ownership of Lurgan District LOL 6, the House now operates as a leading hospitality venue, providing a unique setting for weddings, conferencing and events. The House also holds a Museum with a treasure trove of artefacts relating to the role the House played in the Second World War.

"It was wonderful to welcome the Secretary of State to Brownlow House today, to show him around this magnificent building, but also to emphasise the potential for further development of the site if funding can be secured. I wanted the Secretary of State to see for himself the potential for this project. The Government is committed to ‘Levelling Up’ the UK in terms of infrastructure across the country, and I am working hard to help those within Upper Bann to avail of these funds."