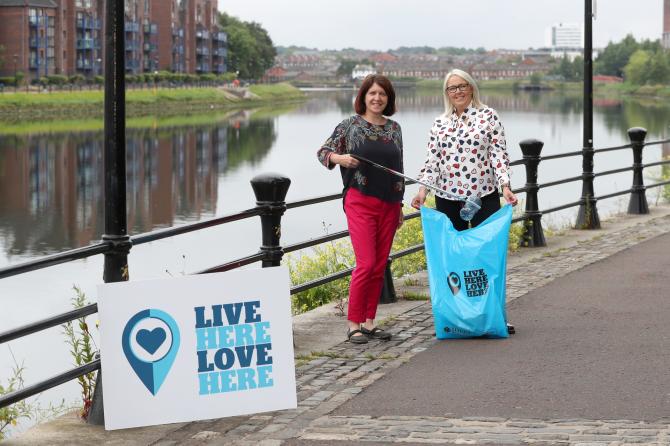 Now in its second year, the scheme is making £198,000 available in 2022/23 for organisations, community groups and businesses to avail of. It aims to help prevent litter from entering Northern Ireland’s waterways, and so applies to both coastal and river areas. This will help to protect our blue spaces, and will improve marine biodiversity, along with the health and wellbeing of our communities.

Denis Waterworth, Vice-Chairman of the Association, explained “Working closely with the four schools, the Council and Councillor Janice MacArthur, the Association made a successful bid for a grant from Live Here Love Here. Each school has been allocated an area of coastline in Donaghadee and an attractive litter picking station has been installed at each. It is hoped that the project will run for several years.”

Proposed projects can be innovative, creative or functional, with the aim of preventing litter from reaching the marine environment. As 80 per cent of marine litter comes from land-based activities, grants are available for projects across all geographical areas of Northern Ireland.

Helen Tomb, Manager at Live Here Love Here, added: “The catastrophic effects of marine litter, especially plastics, on animals has been well documented and could also impact humans by working its way up the food chain. With this in mind, we are delighted to be delivering the Marine Litter Grants scheme for a second year. Funded by DAERA, the programme proved a tremendous success last year and we hope that this year’s recipients will help to ensure that our country plays its part in eradicating marine litter pollution.

“I would strongly encourage all of those who are eligible to, to apply for a Marine Litter grant, to help to make Northern Ireland a cleaner, greener and safer place to live.”

It is hoped the scheme will run for a further two years with up to £675,000 available by 2025. It is funded by DAERA and will be administered by Live Here Love Here, the community-based campaign with an aim to promote civic pride and community action to improve our local environment.

Rachel Hook, Environmental Policy Lead at DAERA commented, “We are delighted to be partnering again with Keep Northern Ireland Beautiful to provide funding for the Marine Litter Grants Scheme. The NI Executive committed to eliminating plastic pollution in the New Decade, New Approach document and the scheme is not only helping to deliver on this but is also helping to bring communities together and encouraging innovation.”