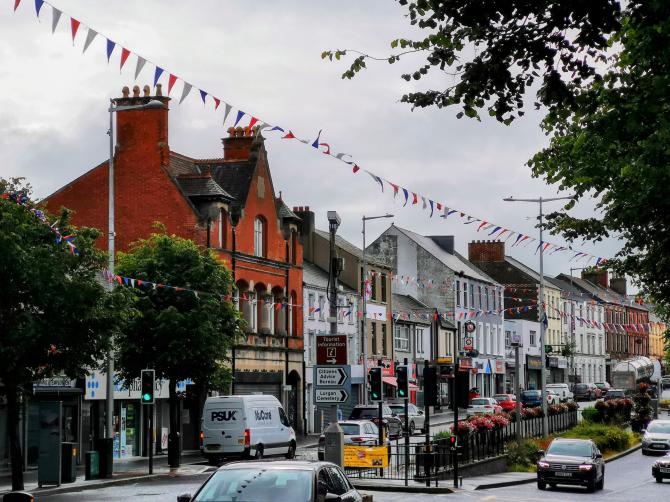 Bunting, which was erected last night in Lurgan town centre.

The Alliance party has confirmed that it reported people who were erecting bunting in Lurgan last night (Wednesday) to the police.

The PSNI has confirmed that it received a received a report that flags were being erected in the High Street area.

It is understood that the complaint was made over an allegation that those erecting the bunting did not have permission to put it on lamp posts, while they felt that those doing it were blocking one of the town’s main thoroughfares.

A Police spokesperson said: “Officers attended and no offences were detected”.

The bunting was still able to be erected as our picture, taken this morning, shows.

Sources close to those who were erecting the bunting, which was being put up in time for the Twelfth and other parades which happen at this time of year, said they were “saddened” by efforts to “deny us the freedom of expression”.

“What happened last night is nothing new, it has been happening in the town for decades,” one source said.

“The people of this town are expressing their culture at this time of the year and we are very saddened there are those in society who would seek to deny us the freedom of expression.”

Confirming that they were behind the complaint, an Alliance spokesperson said that everyone in Northern Ireland is free to celebrate their culture, but added that it must be done in a safe and respectful manner.

The party representative added: “Alliance will always prioritise public safety and in this instance, raised concerns after being notified forklifts were creating a traffic hazard and bunting was being erected without permission from the landowner.

“Alliance has been consistent in calling for legislation to better regulate the flying of flags and emblems from street furniture, so they are done in a regulated, time-bound manner following appropriate consultation. We repeat that call.”