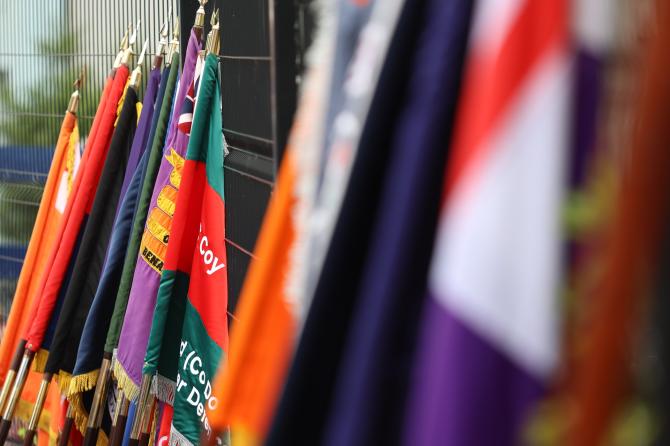 The County Armagh Twelfth Demonstration is now very firmly established as the largest Orange gathering in the world on the day and encompasses the full range of the Orange family.

This year all roads will lead to Armagh, with 11 District Lodges on parade. There will be a total of 150 private lodges and almost 5,000 brethren and, in addition, ladies from the Association of Loyal Orangewomen of Ireland will take part along with a number of Junior Boys and Junior Girls Lodges.

The Co Armagh Demonstration can attract upwards of 20,000 spectators, including some from across the Border.

Approximately 67 bands will accompany the Lodges and some of the finest Pipe, Accordion, Silver and Flute Bands in the country will be on parade. There are always approximately 4 Scottish bands on parade at the Co Armagh demonstration and as the “County of the Diamond” is renowned for the Lambeg Drum, dozens will be accompanying the Lodges, especially if the weather is good.

Lurgan District comprises of 19 lodges, mainly based in the stately Brownlow House, the largest Orange Hall in the world, beside Lurgan Park.

The District honours its elderly brethren each 12th July by giving them pride of place at the head of the District as they are transported in two black limousines.

Lurgan District holds a very well attended Mini Twelfth on the Friday evening before the Twelfth when the local Lodges are joined by brethren from Lower Iveagh West District.

The County Armagh Twelfth rotates around the District Lodges in an eleven-year cycle and this year it is the turn of Armagh District LOL No. 5 to host the celebrations. This was to have been the venue in 2020 and indeed 2021, but due to the covid-19 pandemic, only limited parades by local bands were held in 2020 and local District Lodges in 2021.

The District is centred on the historic ecclesiastical city and has 10 Private Lodges, with approximately 370 brethren. The Lodges take great pride on their turnout on the 12th, with virtually all the brethren wearing the traditional bowler hat and white gloves.

The District Lodge holds an Act of Remembrance each 12th morning outside Armagh Orange Hall on the picturesque Mall, where 7 members murdered during The Troubles, are commemorated on a Memorial Plaque.

The brethren of Armagh District are very looking forward to hosting the parade for the first time since 2009 and to mark the event, a special souvenir booklet has been produced.

The Lodges of the host District will assemble on The Mall from 9.00am where they will be joined by County Grand Lodge Officers. They will then parade to the Armagh War Memorial at 9.30am to lay a wreath and be joined by the first of the visiting Districts who will have reached that point from the bus drop-off point on the Portadown Road. The main parade, headed by Tassagh Silver Band and Tassagh True Blues LOL 49, will then commence at approximately 10.00am.

Armagh District will be followed by Richhill, Killylea, Lurgan, Newtownhamilton and Portadown, Districts; the remainder of the Districts, namely, Markethill, Bessbrook, Keady, Tandragee and Loughgall will parade as they arrive, and by 12.30pm, all Districts should be in the Demonstration Field.

The return parade is scheduled to commence from the Demonstration Field at 3.00pm, with Lurgan District LOL No 6 being the first to leave. The parade route will be: Hamiltonsbawn Road – Barrack Hill – The Mall or Portadown Road. The County Officers will review the parade at the Orange Tree at the bottom of Barrack Hill. A local tradition is that all return parades to the Orange Hall on The Mall process around this tree.

Each District will depart at the allocated time and board the buses on The Mall and the Portadown Road. Armagh District will be the last to leave the Field at approximately 5.00pm.