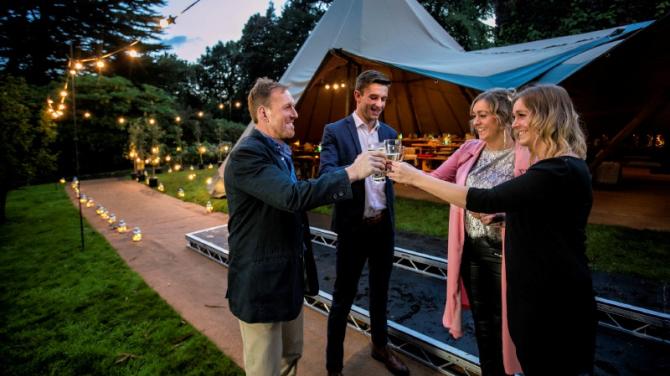 An image from a previous Food and Cider Festival.

Armagh City, Banbridge and Craigavon Borough Council is to accept £15,000 in funding from Tourism NI for help with two of the borough’s most prominent events.

The decision to accept funding of £9,000 for the council’s 2022 Food and Cider Festival and £6,000 for the Georgian Christmas Festival was taken at the monthly council meeting on Monday, June 26 after a proposal to do so was put forward by Councillor Sam Nicholson and seconded by his UUP party colleague, Councillor Kyle Savage.

At the meeting councillors were told the Food and Cider Festival and the Georgian Festival are two of the borough’s three signature events as identified in the integrated tourism development and marketing strategy and action plan 2017-22.

The Food and Cider Festival is a four-day joint council and private sector event,  held in the borough at apple harvest time in September. This year it will take place from September 8-11. The borough’s Food Heartland chefs and producers curate the individual events.

The programme includes events which celebrate and promote local food and drink. It attracts over 5,000 visitors each year, with 28 per cent of visitors coming from outside the borough.

The Georgian Festival is held in Armagh every year for four days at the end of November. This year it will take place from November 24-27. The high quality programme features over 40 bespoke events and at the heart of the festival is Georgian Day.

Georgian Day is a celebration of food, craft, stories and heritage and attracts some 25,000 visitors with 30 per cent of the visitors coming from outside the council area.

Speaking at the  monthly councilmeeting, Councillor Sam Nicholson said he was happy to propose the funding is accepted and said both events are “absolutely massive” in terms of the borough’s tourism offering.

“These are two signature events within our borough and have gone from success to success despite Covid-19,” said Cllr Nicholson.

“We are trying to reinvigorate the tourism potential of Northern Ireland and as part of our borough those two events are absolutely massive. When you look at our agri-strategy and the idea of agri-food and things it all blends in so I am more than happy to propose we accept this letter of offer.”

Council’s Lord Mayor, Councillor Paul Greenfield said it was clear there is a “great appetite” for these events and noted how when Council put them on “they always seem to bring the people out”.

Councillor Kyle Savage said he was happy to second the proposal and called on the council to use the food and cider festival “to promote the local agri-food businesses as much as possible”.