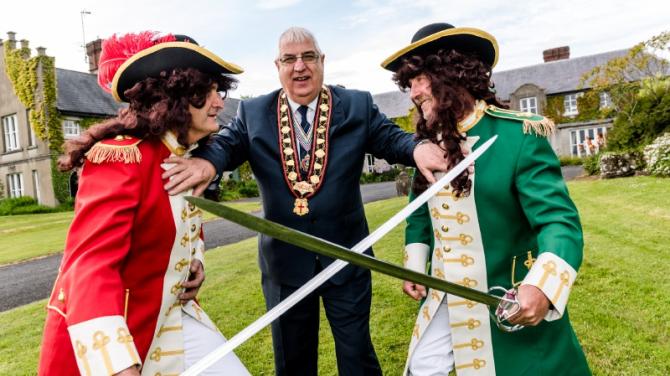 A call for the Government to restore full citizenship of the United Kingdom to Northern Ireland will be made at the Royal Black Institution’s Scarva demonstration.

The traditional July 13 celebration - a casualty of the pandemic for the past two years - is expected to attract around 100,000 visitors to the scenic village of Scarva.

The Sham Fight will be preceded by a parade of 4,000 members of the institution, accompanied by up to 75 bands, which will proceed through the village, starting at 11.15am.

The institution traditionally holds a religious service (at 2pm) after the spectacle of the Sham Fight (at 1.30pm) with resolutions reaffirming loyalty to the British throne, upholding the reformed principles and the maintenance of the United Kingdom.

Part of the constitutional resolution reads: “We call upon Her Majesty’s Government to restore the citizens of Northern Ireland to full citizenship of the United Kingdom as set out in the Act of Union and remove the influence of foreign powers.”

The other resolutions focus on faith and loyalty.

The loyalty resolution notes that Her Majesty the Queen is now marking 70 years since she acceded to the throne on the death of her father, King George VI.

“She has been and remains an important figurehead for our nation and the Commonwealth during times of enormous social change,” reads the resolution.

The faith resolution refers to the institution - founded in 1797 - as being based on the teaching of Holy Scripture and its commitment to the furtherance of the Christian message of the Cross.

The following are the resolutions:

The Royal Black Institution is based on the teaching of The Holy Scriptures and is committed to the furtherance of the Reformed Christian message of the Cross. We believe that such a message is needed more than ever.

The Bible reminds us in 2nd Timothy, Chapter 3, verse 15: “And from a child thou hast known the holy scriptures, which are able to make thee wise unto Salvation through faith which is in Christ Jesus.”

Therefore, we call upon our members to repent of their sin, trust in Jesus Christ alone for their salvation and continue to live their lives by reading God`s Word, spending time with God in prayer and in daily obedience to Him.

This year, 2022, marks 70 years since Her Majesty Queen Elizabeth ll acceded to the throne on the death of her father King George Vl. She has ruled for longer than any other Monarch in British history, being admired for her sense of duty and her devotion to a life of service. She has been and remains an important figurehead for our nation and the Commonwealth during times of enormous social change. We have been truly blessed by her leadership and we as Sir Knights of the Royal Black Institution, and as her loyal subjects, pray that she will continue to provide that leadership to her people. GOD SAVE THE QUEEN

As Northern Ireland continues to live under the influence of foreign powers, which have diluted our constitutional right to remain as citizens of the United Kingdom, we call upon Her Majesty’s Government to restore the citizens of Northern Ireland to full citizenship of the United Kingdom as set out in the Act of Union and remove the influence of foreign powers. We also implore that all politicians use their powers to deliver successful and democratic government throughout the United Kingdom by providing adequate services which meet the needs of all the people. This will lead to a successful United Kingdom where all citizens will feel equally valued.