Lurgan and Craigavon's top 10 takeaways according to TripAdvisor reviews 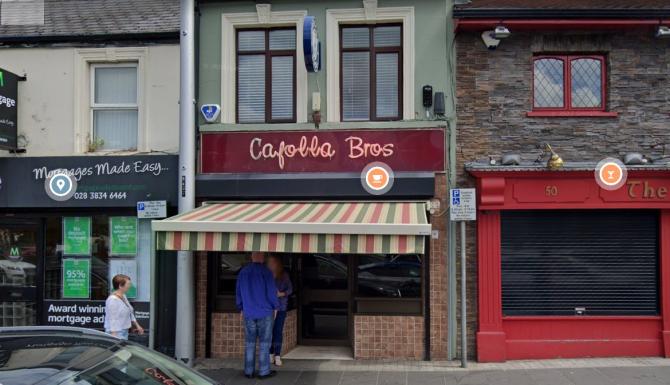 Like it or not, it’s fair to say that the takeaway scene in Lurgan and Craigavon is thriving.

Whether you’re after a Chinese or an Indian, or if you fancy pizza or a burger, you’ll not be stuck for choice around this part of the world!

Users on TripAdvisor have been ranking the best places in Lurgan and Craigavon to get a takeaway – and it seems as though users prefer a chippy tea above all else.

OK, so this one is actually in Portadown, but if you do a search for takeaways in Lurgan on TripAdvisor it comes up. We don’t make the rules!

And in any case, it’s always good to keep an eye on what the opposition are up to in Portadown!

With a rating of 3.5 out of 5 from 33 reviews, users raved about their chicken burgers, super sauce and curry sauce.

One five star rating said JP’s was the “best chippy in town”, while another who said it was “fantastic” warned that anyone planning a visit should “be prepared for long queues, especially on a Friday”.

Out in Craigavon at the Legahory Centre, Hot & Spicy has received mixed reviews on TripAdvisor, reflected in its 3/5 rating from 15 reviews.

On the site you will see some people slating the customer service, while others will praise it including special mention for one member of staff who “is [the] most pleasant and bubbly girl and deserves recognition for being so nice and polite”.

As for the food, one review said: “We have tried various meals from here including Indian food & kebabs and all the food has been very tasty. The kebabs are huge so come here hungry!”

Another added: “I've never had a bad meal out of this place and my son wouldn't eat pizza out of anywhere else.”

Many of the negative comments seem to surround delivery times with comments suggesting that customers had to wait two hours for food – but with these reviews being posted in 2019 hopefully things have improved.

Over to Moira now, where Graham’s have been operating for many years. They have achieved a 3.5/5 rating from 22 reviews.

“Graham’s Fish & Chips continues to live up to our expectations,” said one user.

“The biggest challenge is making an order - the phone lines are always busy - normally a great sign! This proved to be the case.” They suggested that taking online orders would be a big help.

Another who decided to try Graham’s after a recommendation from a friend added, “We were not disappointed. They were excellent. Dry, hot, crispy, tasty... Will definitely be back.”

Just up the road in Magheralin, Mak’s also scored a 3.5 rating.

In fact, there were only five reviews for Mak’s on TripAdvisor but the most recent one offers some sage advice.

“First off, don’t come here if you want FAST FOOD. Chicken burgers are battered in front of you from fresh chicken breasts, and fish likewise,” it reads.

“Chips are fried to order, and burgers fried slowly to perfection. If you want quick, pre-battered chicken and fish, and chips cooked before you order, so you’re in and out within a minute, go elsewhere.
“I feel that Mak’s offers similarly priced, but higher quality food than nearby chip shops, and anyone knows “if you want it good and cheap, it won’t be fast”. You can’t have all three!
“I would advise ordering the spicy chicken burger. The crunch of the breadcrumbs in the batter is amazing.

“Also, if you want your fish n chips 6pm on a Friday, and be in and out the door in 5 minutes, dream on. Mak’s is very busy then (rightly so) so either prepare to wait half an hour, or CALL YOUR ORDER IN AHEAD OF TIME.”

This writer has to hold his hands up here and say that he is a massive fan of the superchips out of this Waringstown eatery.

And with a 4/5 rating, it seems many of you are fans of the food from this spot on the village’s Main Street.

“First, it was a large Mercedes lorry kitted out as a mobile chip shop on a Friday night, and then a stationary shop on the Main Street of Waringstown, but Raymond and Mabel have kept the quality of their fried food to a very high standard over many years!” said one user.
“Reliable, dependable, well cooked and always piping hot - it's our first choice for a takeaway! However, I would just comment, that it would be nice to have a choice of fish, perhaps haddock, instead of just having cod!”

Sneaking into the top five with a 4/5 rating, the only Chinese takeaway on our restaurant has received some negative reviews recently with claims that the food is “tasteless”.

But it has been worthy of praise too. “I recently stopped by Eastern River carry out for a Beef Curry & Fried Rice,” said one user.

“It was lovely! It had been over a year for no reason since I last eat here. Since I've been been back three times Salted Chilli King Prawns, Curries and BlackBeen green pepper dishes are lovely!

Our first chippy from Lurgan town centre, down William Street is where you will find the Station Grill.

Users, who gave it a rating of 3.5/5, praised their chicken and fish batter, as well as their “friendly staff and quick service”.

“The food is excellent and especially the fish - its massive with nice light crispy batter and nice dry chips,” added one commenter.

Another added: “The fish was massive crispy & dry as were the chips! It's the best fish n chips we've had in a long time!”

This Flush Place restaurant scored a 3/5 rating but scored well for its value for money.

And it scored a 5/5 review just days ago from one user who said that Maloney’s sirloin steak special was the “best meal I’ve had in a long time, and very reasonably priced for a steak meal compared to other places”.
There was praise for the menu which had plenty to choose from.

One thing we haven’t read a lot about on these reviews is a salad option – and if you go to Maloney’s you won’t be disappointed.
“The salads are really freshly made, laid out well and lettuce crisp and fresh and salad plate is made to your personal choice of what you want in the salad, so you can eat healthy in this diner if you like salads, the satisfied customer added.
“Staff were very attentive and helpful and friendly and service was very good.”

Located on Lurgan’s High Street, Chilli Kebab scored a 4.5 rating from its 11 reviews.

In fact, 10 of those 11 reviews rated Chilli Kebab as either excellent or very good, with the other one describing it as “average”.

“I just love their Indian dishes & my wife loves the pizza,” said one user, while another said they serve up “tasty thin cheese burgers… [the] kebabs would fill two people.”

Someone else described the shop as “very clean” and added “I had tried all the pizza places in town and this is by far the best”!

Cafollas scored 4.5 out of 5 with 16 of their 20 reviews scoring them as excellent.

“I love this chippy and I’ve being going ever since I was little,” another TripAdvisor user said. “The food is lovely! And love the ice cream (choc mallow ice is the best!) My favourite restaurant in this town!”

One review back in 2019 said Cafollas had the “best chips in all of Ireland”.

“I work all over the country, travelling from town to town on a daily basis. Therefore I have eaten many a chip, have been into lots of award winning chippies/chippers and yes some of them have been very good but none have been as good a wee Cafolla's.

When this place is on its day, which 9/10 it is - the chips are sooo good, cooked just right at that proper golden colour and crispy peak gain exterior big auld chip and hanging with vinegar - BOOM BOOM BOOM oooooooohhhh and the crispie wee bits at the bottom of the bag too - jeez laweez.”

Where’s your favourite place to grab a bite to eat? Leave us a comment!