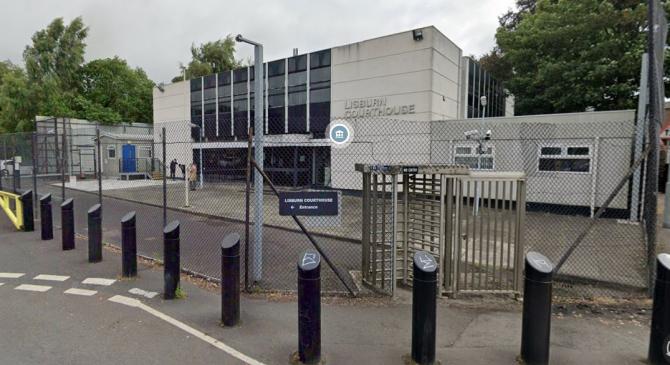 The case was heard at Lisburn Courthouse

An alleged drug courier for an organised crime gang was granted bail today (Thursday) after a judge accused a detective of “not telling me the truth.”

Freeing 42-year-old Stephen Dickson on his own bail of £1,000, District Judge Rosie Watters said that if it were not for the “quite disturbing” evidence of Det. Const. Conlon and the failure of any senior officer to come to court despite her requests, “otherwise I would not be granting bail.”

Appearing at Lisburn Magistrates Court by video link rein police custody, father-of-five Dickson, from the Mourne Road in Lurgan, was charged with three offences arising from a seizure of cannabis on 26 July this year including two counts of simple possession and one of possessing the class B drug with intent to supply

Giving evidence under oath, DC Conlon outlined how Dickson was driving his wife’s Peugeot car on the M1 when cops stopped him and he confessed “there are drugs in the boot.”

“There was five kilos of herbal cannabis in the boot, worth upwards to a maximum value of £75,000,” said the officer adding that a further small amount was seized at Dickson’s home.

“At this point we believe he is a trusted courier for an organised crime gang because of the amount of drugs,” said the detective, also telling the court that while there are ongoing investigations, “we don’t know who it belongs to - it could be Chinese or paramilitary.”

Initially, he claimed Dickson’s car was stopped “because it was reported as driving irregularly” but defence solicitor Ciaran Downey highlighted that three other people had been arrested in Belfast at the same time with one appearing in Belfast Magistrates Court earlier today and that in a press release, the PSNI themselves had connected them all.

Initially DC Conlon claimed he did not have any information but DJ Watters said “there’s a obviously a link….you must know what the link is” and after she rose for a short time, the officer conceded that 17 kilos of cannabis had been seized at a house in Belfast and Dickson was stopped because he was seen driving away from the area.

“Why not tell me that in the first place,” the judge demanded to know. “I’m concerned that I’m not getting the truth.”

“When a police officer comes into the box they need to tell me the truth otherwise it’s very hard for me to rely on what they say,” said DJ Watters who rose again demanding that the senior investigating officer attend court because “I have never been in this situation before.”

However after another break, the judge was told that DI Kelly “is not available” and while the detective tried to tell her “there appears to be a misunderstanding here,” he was clearly told by the judge “no, I think you have misled the court.”

Mr Downey argued that in the linked Belfast case, that defendant had been accused of having £200,000 of cannabis but was still granted bail albeit on stringent conditions, adding that despite police concerns about further offences, it would be “behind foolish” for any OCG to use Dickson again given the level of police attention and surveillance that will now be on him.

Freeing Dickson on bail and adjourning the case to 19 August, DJ Watters warned “I will be taking this further.”