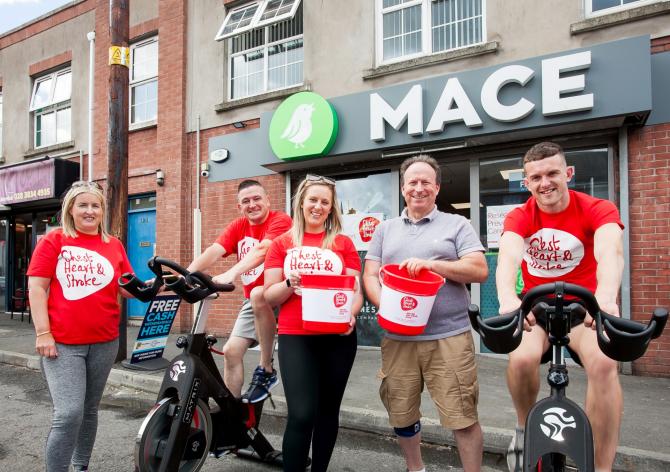 MACE Victoria Street Lurgan recently celebrated raising a staggering £10,000 for Northern Ireland Chest Heart and Stroke (NICHS) through donations from their customers, and this week the store was back fundraising for the charity.

"Everyone at the store enjoyed the challenge and they were spurred on to try and raise as much money as possible, after our generous customers helped us become the first MACE store to reach a £10,000 fundraising milestone for Northern Ireland Chest Heart and Stroke.

“The Lurgan community once again showed how generous they are and helped us raise over £1,000 on the day. It was great to see so many of our customers in-store supporting us as we pounded the pedals and went the extra mile to try and help people in our local community.”

The fundraising event saw lots of supporters drop by to cheer the cyclists on and even get into the saddle themselves to help clock up over 170 miles. This included ABC Councillor Keith Haughian; swimmer Francie McAlinden; three times Ulster Champion and Irish Champion cyclist Kieran Downey; Irish Professional Welterweight Boxing Champion Stephen Haughian; and MMA fighter Ciaran Brady.

Jackie Trainor, Director of Income Generation at Northern Ireland Chest Heart and Stroke added, “We are so grateful for the ongoing generosity of MACE, their staff and customers who, over the years, have ensured that thousands of people affected by chest, heart or stroke related illnesses have received the support and care that they deserve.

“Nearly 90% of our care and prevention services and research projects are funded exclusively by donations from the public. Fundraising efforts like MACE Victoria Street Lurgan’s static cycle are vital to the work we do. The money raised today will go a long way in helping support the 335,000 local people living with chest, heart and stroke conditions and their families.”