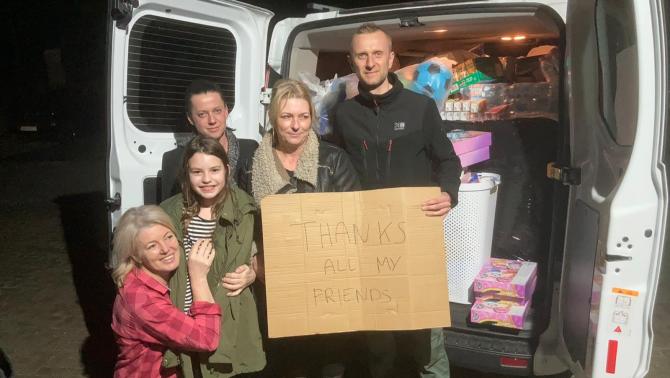 A street collection will take place in Lurgan this Saturday (September 24) to raise funds for an ambulance to help the people of war-torn Ukraine.

The fundraiser is being organised by Kris and Magda Piedel, who live in the town but who are originally from Poland.

Their support for Ukraine began with when they helped the family of their Ukrainian friend to evacuate from Ukraine to Poland.

Kris then spent a week at the border helping to transfer people to refugee centres and evacuate anyone who needed help across the Polish border.

They organised a fundraiser amongst their friends from work and others. Thanks to donations they managed to rent a van and cover the fuel costs. In one week Kris travelled 4,000km!

The rest of the money from the donations was used to purchase the important items for mothers and children in the refugee centre in Boniewo, such as microwaves, tumble-dries, kettles, iron, beds, mattresses, bed linens, baby thermometers, underwear, hygiene items, food and toys).

They went back to Ukraine to help people trapped inside the country, this time bringing medical equipment including an ultra sonography along with medicines and medical dressings to a military hospital close to the capital Kyiv.

They also delivered some military equipment to the frontline soldiers and brought some food for abandoned animals that have been left starving in the streets.

On their GoFundMe page, where donations can also be made, they say, “The need inside Ukraine is so great that we feel we must keep on helping.

“We have already asked all of our friends and family for support so many times that we now hope the people of Northern Ireland will get behind us.

“This time we would like to raise money for a second-hand ambulance because the hospital is in such need as it has lost so many ambulances and is overwhelmed with war casualties.

“We plan to fill the ambulance with aid then drive it to the hospital in Ukraine.

“If someone could even donate an ambulance, we would be able to leave sooner and get the vital help to the people inside the country.

“If we can get enough money to buy a second-hand ambulance, we would like to fill it with medical supplies, long term food, underwear, hygiene items and baby foods to pass on to those most in need.

“We thank everyone who has supported our first two trips to Ukraine and hope that we can get enough money to go back a third time and help. All donations will be gratefully received.”