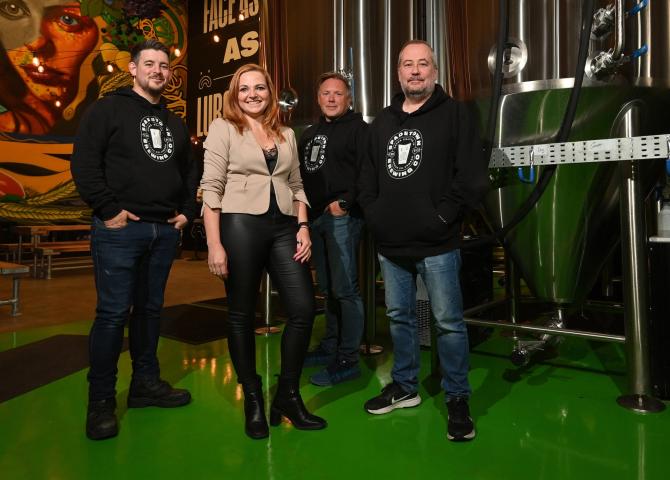 It comes as the microbrewery welcomes two new members to its team and prepares to launch three new beers.

Dave Graham, Spadetown’s new Brew Guru, is overseeing the development of the brewery’s three new product launches; a Raging Red Ale and Dark Cloud Stout, both of which will launch in the autumn, and a zero alcohol IPA due to be launched early next year.

He joins the Spadetown team alongside its new commercial director Annie David, who is tasked with developing the Spadetown brand proposition in the local market through new product launches, securing retail listings and increasing its availability on draught in watering holes across Northern Ireland.

Launched in 2021 following a major investment by owners Martin Dummigan and Patrick McAliskey, Spadetown established a dedicated 5000 sq ft production facility in its hometown of Lurgan.

Upgrading its packaging facilities, Spadetown has also installed a new canning line. When fully operational, the equipment will fill up to 2,200 cans per hour.

Spadetown co-founder Patrick McAliskey says: “With additional capacity offered by our new fermenters and production efficiency improved by our new canning line, we’re equipped with the technology to capitalise on the significant opportunity Spadetown has in the market.

"The investment also solidifies our commitment to re-establishing and reinventing Lurgan’s rich brewing legacy; to preserve tradition, to create new employment opportunities and fertile ground for future investment in the local area, and to produce a premium export product that is unique to this place and its communities.”

Commercial director Annie David says: “This latest investment sees the launch of three new limited edition brews which will double our product range, building upon the early success of our core IPA, pilsner and lager to offer an assorted drinks selection, including a non-alcoholic option, to every consumer.

“The new products also reflect the personality of Spadetown, which is unlike anything else available in the local market. It has an entirely unique, but also typically Northern Irish sensibility, which we believe is a huge selling point for the brand and will sustain its upward trajectory as we expand our presence and grow sales volumes through new listings in on- and off-trade establishments over the coming months.”

Spadetown’s Raging Red Ale and Dark Cloud Stout will be available in retail packs from October and its alcohol-free IPA will be launched early next year. For more information and to check for local stockists, visit spade.town.