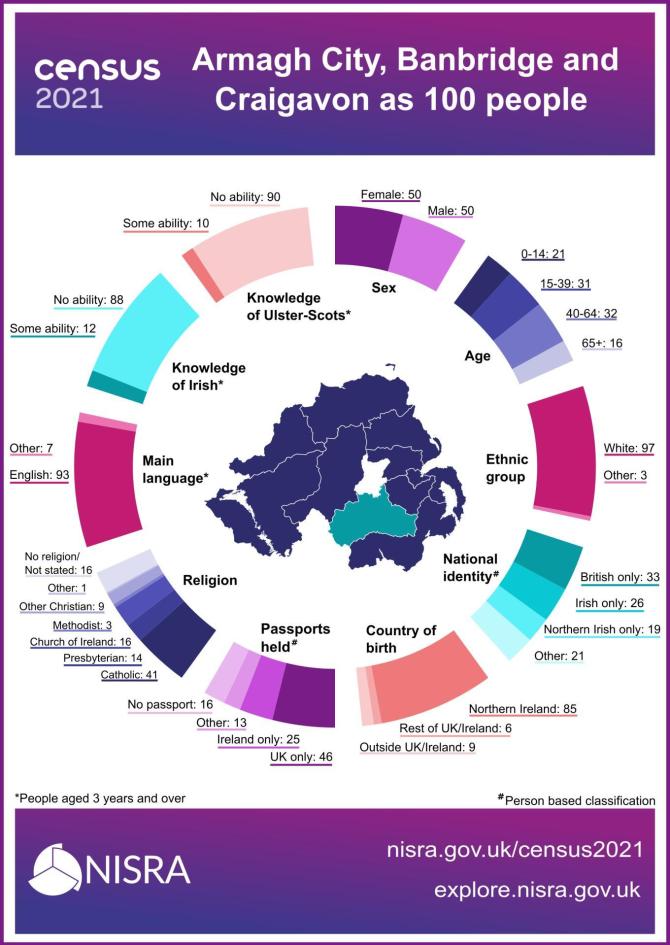 The number of people living in the Armagh, Banbridge and Craigavon borough has increased by 9% over the past 10 years.

Church of Ireland is the next biggest religious denomination with 16%, followed by Presbyterians at 14%. Just 3% of the population are Methodists, while 9% say they fall into other Christian groupings. 16% say that they have no religion or did not state their religion.

In terms of national identity, a third of people within the borough said they were British only and 26% as Irish only. Those who identify as Northern Irish make up 19% of the borough’s population, while 21% were classed as ‘other’.

Just shy of half of people here only have a UK passport, while 25% have an Irish passport only. Those with no passport made up 16% of the borough’s residents and 13% were classed as ‘other’.

With regards to languages, 93% of respondents said English was their main language. 90% said they had no ability when it came to Ulster Scots and 88% said the same regarding their knowledge of Irish.

The population has a 50/50 split when it comes to the number of males and females, while the largest age grouping in the borough is those ages 40-64 (32%), marginally ahead of those in the 15-39% bracket (31%). Young people aged 0-14 make up 21% while the figure for the 65+ age group was 16%. This means that the proportion of younger people living in the borough decreased while the proportion of older people increased.