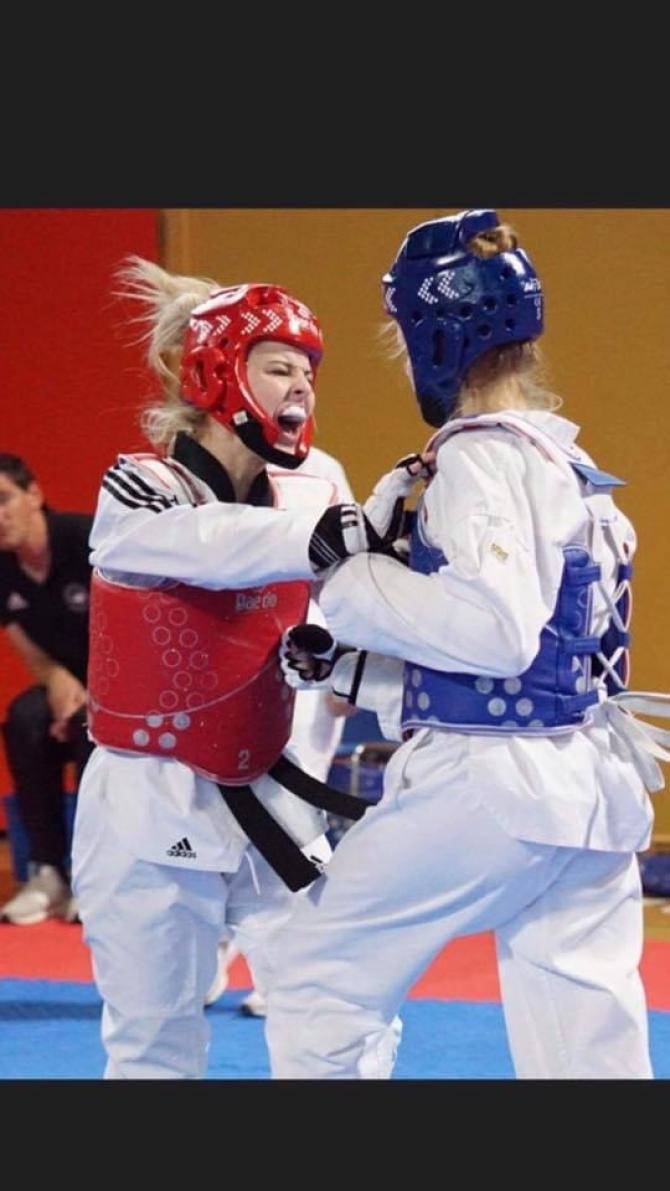 Jodie McKew heads to Sofia as part of Team GB to compete in the European Taekwondo Championships on Easter Monday.

Dollingstown's Jodie McKew heads off this Easter Monday to compete against the best European taekwondo talent.

She will part of a Team GB squad littered with talent, including double Olympic gold medalist Jade Jones, who caught the eye of many during her emotional win at the London 2012 games.

But what is remarkable about Jodie's achievement is that she is only 16. To compete at senior level you have to be 17, but she has been able to be selected due to the year she was born in.

Jodie told Your Lurgan that she's “really excited” to be heading to Bulgaria.

“I was really shocked because I wasn't expecting it,” she said. “I'm only 16 so to be asked to fight in the oldest category is an honour.”

“I've taken part in European championships before and I had been selected for the World championships but they had to be cancelled due to coronavirus.

“There's different age categories – cadets is for the younger age groups, then there's juniors and seniors, which is Olympic level from 17-years-old. Because of the year I was born in I can compete at the Olympic level.

“I'm in the 53kg category which has over 20 people competing in it. Everyone goes into a draw and the winner progresses in each fight.”

What's even more remarkable is the fact that Jodie stumbled across the sport by pure chance one night in 2012 when a planned swimming trip to Lisburn LeisurePlex was changed at the last minute due to the pool being closed.

Jodie's mum, Heather, explained: “Her dad said to her that he used to do taekwondo in the centre and asked her if she wanted to see if the sessions were still there.

“Sure enough, there was a session on. Jason asked her if she'd like to try it and she said she would.

“Prior to that they had been to a kick-boxing club and Jodie, at that stage, was too young to join the club. From then she kind of had it in her head that she would give taekwondo a go. She joined it with her younger sister and the both of them just took to it.

“Within a year they had double graded their belts. Jodie then began competing in local competitions and after that she was heading to the British nationals and European championships.

“She achieved her black belt within two years.”

Jodie joined the Team GB developmental programme when she was 13, and that has meant that she has had to make a lot of sacrifices for someone so young – there have been a lot of missed birthday parties and wedding receptions, her mum says.

Every other weekend Jodie travels solo to Manchester to train for two days before returning home for lessons at Banbridge High School – something she has done for the last four years.

In return for her hard work Jodie has represented GB on many occasions, having been to the Cadet Euros in Budapest. She was selected to represent Cadet GB in Spain also, and she's been to Croatia and Slovenia amongst others with Team GB.

She's won World Grand Prix gold as well as top prizes at tournaments in Holland, Luxembourg and Switzerland – not forgetting a three-time winner of the Junior Female prize at the Armagh, Banbridge and Craigavon Junior Sports Awards.

Success such as this has to start somewhere, and for Jodie it was at home – in her living room in fact, as it was changed into a martial arts gym.

“Mum and dad have been the best support,” said Jodie.

“A lot of people gave up on me when I started going to England to train, but I knew that if I stayed at home I would only be able to get so far. If you want to get to that next level you have to travel to England.

“We put taekwondo mats in our living room and my dad trained with me for ages. We've now built a massive gym out the back which is really good. They've also had to pay for flights and taxis back and forward, they've been so good.”

The community too has played their part in getting Jodie to where she is today. Her old primary school, Maralin Village, allowed the family to host coffee mornings, while zumbathon fundraisers have been held and even old horse shoes have been crafted into moneyspinners to get Jodie to Manchester.

Heather added, “It all helps because we're sending Jodie over to Manchester twice a month – you have her flights, her accommodation, there's taxis because she's flying solo... but she's following her goal and it's all worth it.”

That goal includes emulating Jade Jones' achievements – and who knows, maybe we'll see Jodie competing at the Paris games in 2024.

But for now, Jodie says it's an honour to be in the same team as one of her heroes.

“It's great to be in the same squad as Jade,” she said.

“In fact, she has been my inspiration, someone I look up to and say 'I want to do that, I want to compete at the Olympics'.

“When I was tiny I was getting pictures of her, now I'm training in the same place as her and with her and now I'm at a competition with her – it's mad!”

Everyone at Your Lurgan wishes Jade all the best for Sofia and for the future!