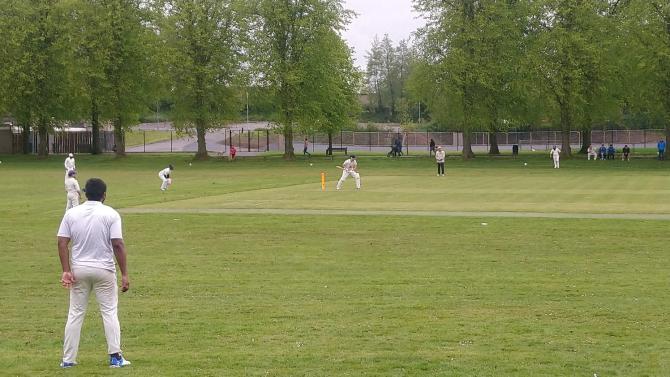 Victoria 1st XI defied the weather to kick-start their season in the Lagan Valley Steel T20 Bowl. The game had been in doubt on the morning of the match, but a concerted effort ensured that the Lurgan Park pitch was playable.

Victoria lost the toss and were asked to bat, as Dunmurry looked to take advantage of the damp conditions.

Andrew Gray (19) and Darren Vennard (17) got Victoria off to a solid start, before Garry McClune looked to give the innings real impetus. A twinged hamstring looked to derail his efforts, but he managed to continue, before being dismissed on 31, with the score on 78-4. Dunmurry had managed to pull back the Victoria run-rate with some good bowling changes, before Matthew Parks (19*) managed to re-ignite the innings with some sharp running between the wickets.

The Victoria innings came to a close at 104-5, which seemed a healthy total, considering the heavy outfield.

Victoria got off to a great start in defence of their total, with a wicket maiden from Thomas Greenaway, while Joshua McClune recovered from a poor start to only concede four scoring shots in his three over spell.

However, as Dunmurry were able to keep pace with the required run-rate, wickets were needed. Step forward, David Gilpin and Bobi Babin. Babin made an instant impact, with a wicket in his first over, as Gilpin picked up two more. Babin’s spell in particular, saw the required rate soar, as he went for a measly 10 runs in his four overs.

James McVey and Ben Johnston came on and kept the run-rate low, without much reward. A great bowling and fielding performance from Victoria restricted CSNI to 81-5 from their 20 overs.

Openers Robert Black and Joshua Woods got the innings off to a quick start before Woods lost his wicket, taking on the bowling.

Joshua McClune was next in, and joined Black in taking the positive approach. Victoria chased the target down inside 10 overs with Black especially looking in fine form, finishing on 31*, with McClune on 20*.