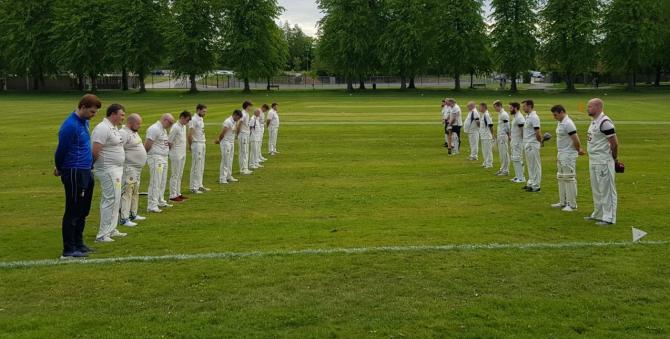 Victoria 2nds and 3rds pay their respects to Reggie McNally and Derek St Clair before their cup game last week.

Victoria 1st XI’s unbeaten start to the season came to an end in a dress rehearsal for the T20 Bowl Final the following week.

Drumaness Superkings won the toss and unsurprisingly elected to bat, on a very batsman friendly surface. The Drumaness batsmen were able to get off to a good start, as the short boundaries and quick outfield made it difficult to manage the run rate.

Thomas Greenaway was economical, despite bowling in the powerplay, but Victoria struggled for the necessary breakthrough.

Shyman and Cunningham of Drumaness both gave chances, but Victoria’s fielding was not up to par and both batsmen reached their half century as they put on 125 for the opening wicket.

The breakthrough finally came, but not until the 15th over, through Darren Vennard. Andrew Gray removed the other opener, allowing Victoria to slow the flow of runs in the last few overs. However, a score of 173-4 was always going to be an uphill task.

Andrew Gray (16) gave the away side some early hope, as he plundered 12 off the first over, however wickets fell quickly at the other end before Gray himself was dismissed and Victoria were soon 35-6 after eight overs.

Patrick McVey (17) joined Matthew Parks (21) at the crease and their run a ball partnership helped to restore some respectability to the score at 72-7.

Another couple of quick wickets left Victoria nine down as Greenaway (10*) and Samuel Irwin, finished off the innings at 99-9.

Perhaps the most interesting match of the week occurred between Victoria 2nd XI and Victoria 3rd XI, who had drawn each other in the Minor Qualifying Cup. The match lived up to the billing, as it turned into a fascinating game of cricket, played in fine spirits.

With the sides boasting some unknown quantities and experienced heads both captains had signalled intentions to bat should they win the toss, which was duly won by Peter Martin on his 3rd XI captaincy debut.

An opening partnership of Adam Stirling and Caleb Boomer got things under way.  After a high tempo start with some fine shots from Stirling (24) and good rotation of the strike that saw a decent run rate, three wickets fell in quick succession and seemed to spell trouble for the 3rd XI - James McVey removed Boomer and two good catches off the bowling of 2nd XI captain, Ben Johnson.  However, a stabilising middle order performance from Jake Hanlon (12) and Peter Martin (15), who despite not playing many big shots saw good strike rotation before both were dismissed, both by Samuel Irwin. The 3rd XI posted a competitive score 93-5 in their allotted 20 overs.

Chasing 94 to win the 2nd XI skipper sent out a similar partnership of a shot making Joshua Woods and the composed experience of Robert Black.

Despite some very accurate tight bowling in the first few overs, a couple of tough dropped chances let the opening partnership settle and once they were in a series of boundaries and really good shots to rotate the strike, saw the run rate and eventually the game drift away from the 3rd XI.

A late flurry of wickets, including an outstanding catch by Stirling over his shoulder, off the bowling of Boomer to dismiss Black (27) and an LBW off the left arm Calvert to remove Woods (42) wasn’t enough to stop the 2nd XI winning in the 16th over to progress to the next round.

The 2nd XI’s winning run came to a close a few days later, as Victoria 2nd XI entertained CSNI V on Saturday afternoon, and were asked to field by CSNI at the toss.

Joel Davidson and Jonny Irwin took the new ball for Victoria and Davidson got the innings of to a perfect start with a wicket maiden. CSNI were going along at a healthy run rate until the reliable Ben Johnston and James McVey came on and slowed down the run rate.

Johnston took the big wicket of the big hitting CSNI batsman, but CSNI continued to score quickly; posting a tricky 122 in their 20 overs.

Victoria’s run chase got off to a bad start as they lost two wickets in the first over. Joel Davidson and Jamie Hanna counter attacked effectively, leading Victoria to 48-2 after eight overs.

Once the loss of Hanna (12) and Davison (28) occurred, the flow of runs stopped and Victoria were eventually bowled out for 71.