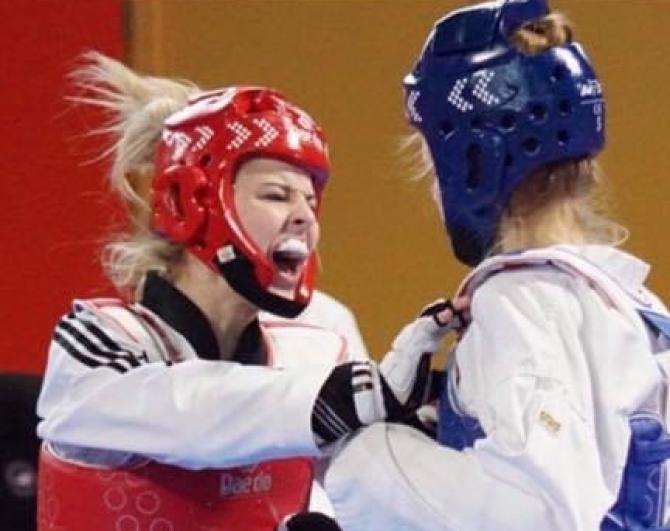 And while it might seem a long way away, the excited 16-year-old from Dollingstown is now starting on a route which could see her reach the Paris Olympics in 2024.

After a gruelling selection process by GB Taekwondo which started out with over 100 applicants a total of just nine athletes - four males and five females - have successfully graduated from the Fighting Chance talent ID initiative.

And for Jodie there was a little bit of history as she became the first person from Northern Ireland to ever achieve this feat.

The scheme, in partnership with UK Sport and the English Institute of Sport, has fast-tracked a plethora of athletes over the last decade from a variety of martial arts backgrounds into the world of high-performance sport.

Jodie, who is now a former pupil of Banbridge High School, has already sampled senior competition, taking part in this year’s European Championships in Bulgaria.

“The championships made me want to start training full-time straight away so I can’t wait to move to Manchester,” she said.

“My aim is to train as hard as I can every day to get better and improve so I can achieve my goals and dreams.

“When I got through I was so excited and phoned my parents straight away because they have helped me along the way.”

Her proud mum, Heather, explained the process which saw her daughter achieve her goal to Your Lurgan.

She said, “From August 2020 Jodie had to go through a process of phases for this position in the full-time squad. She had to progress through each stage to get onto the next one – it was a bit like the X Factor!”

“She did those right through to December. After that she got the letter in February to say she had got through all of the stages, and that was followed by an interview phase with the physios, nutritionists and psychology team and so on.

“We were over in Manchester then for a few days to make sure to make sure everything was what it should be for a young girl moving over, and it was all good.”

Manchester will now become Jodie's home away from home. She'll stay at the under 18s' Olympic house and will train from Monday to Friday.

“It's a whole new chapter for her,” added Heather.

Asked if this was Jodie on the road to the Paris games in 2024, her mum said: “We've achieved her first goal of making it through to the full-time team. Now she has achieved that the hard work will start now for the long road ahead to the Olympics.

“She'll have Olympic qualifiers and so on from here on in. It's a long road but she is where she needs to be. We'll see what happens from here!”