Victoria 'snatch defeat from the jaws of victory' 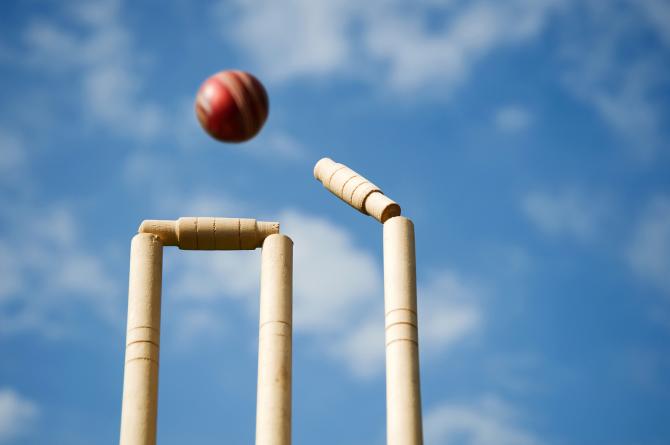 Victoria 1st XI were left feeling deflated after snatching defeat from the jaws of victory, as they fell to a 2 run defeat at home to Donaghadee.

Donaghadee, who had a difficult start to the season, travelled to a Victoria side who entered their league game with confidence following their run to the T20 Bowl Final.

Donaghadee elected to bat first on a warm day and were watchful early on, as Thomas Greenaway and Joshua McClune bowled a tight line but couldn’t find the breakthrough.

Bobi Babin caused the batsmen some discomfort as he slowed the rate of scoring back down, but it was David Gilpin who found the breakthrough, trapping the Donaghadee opener in front. The pair bowled well in tandem and Gilpin picked up a further two wickets which were needed to ensure that the scoring rate remained low.

Donaghadee were 63-3 after 22 overs but continued to bat sensibly and keep wickets in hand, ensuring that Victoria would field for the full 40 overs.

Darren Vennard picked up a wicket as the Donaghadee batsman had started to open up. The reintroduction of Andrew Gray at the death helped to limit the overall score as he took 4-9 in his second spell, with Donaghadee finishing on 139-8.

Victoria lost an early wicket in reply but Gray joined his captain, Matthew Parks, at the crease and the duo compiled a productive partnership as they rotated the strike without taking any undue risks and finding the boundary when presented with the opportunity.

The partnership passed 50 as they chipped away at the lead without looking in danger, before Parks (38) fell in the 19th over, caught behind.

Vennard departed the next ball and Donaghadee had their first foothold in the innings at 79-3, with Victoria requiring 61 more. Gray continued to bat sensibly and another 15 were added to the score before the next wicket fell, followed by a cameo from Babin (15) to take the score to 111-5.

The runs required continued to dwindle as the game appeared to amble towards a comfortable win. At 5.11pm Victoria sat 12 runs from victory with five wickets in hand, before two LBW decisions turned the game on its head, the second one seeing Gray (52) depart after bringing up his half-century.

By 5.25pm, Victoria had been bowled out, two runs short of Donaghadee’s total. A deflating defeat, when Victoria had seemed in charge throughout, and a hard pill to swallow for the Lurgan side who would have expected to see the game out with ease, from their commanding position.

Unfortunately the other Victoria bowlers weren’t as economical, not helped by a few dropped catches. CIYMS ended up making 156-8 form their 25 overs, with Irwin the pick of the bowlers, taking 4-12

Adam Stirling and Matthew Green opened the batting in reply. Green fell early and brought Ben Johnston to the crease. He supported Stirling, who fell for a quickfire (38) and after 10 overs Victoria were 60-2 and in control of the run chase.

However, the CIYMS change bowlers lowered the run rate and removed Johnston (12) and Jamie Hanna (20). Copeland (20*) and Irwin (16*) tried to hit late boundaries, but Victoria came up 33 runs short.

Victoria 3rd XI travelled to the Lawn on Friday to take on a tough Waringstown IV side, boasting numerous players with Premier League experience.

Despite this, the Victoria men acquitted themselves well, scoring a respectable 75 when batting first, with Muzamil top-scoring with 16. Waringstown chased this down for the loss of two wickets, with Jamie Davison impressing with the ball for Victoria.