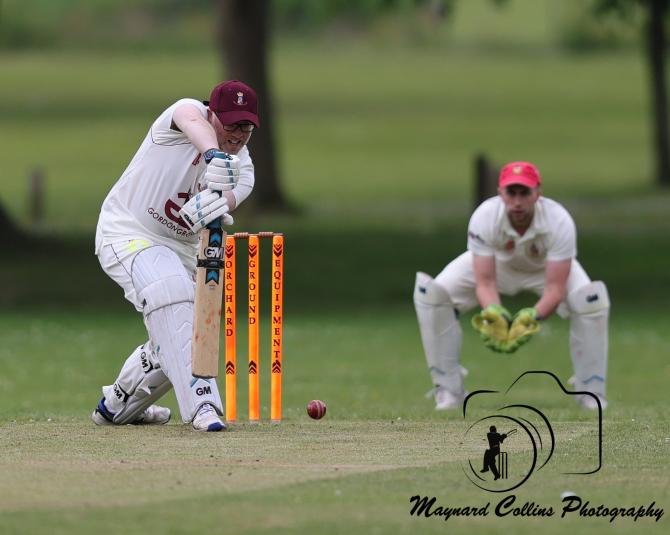 Victoria elected to bat first and the match began with an attritional period of play as Robert Black and Matthew Parks opened for the home side, happy to defend their stumps against a tight opening spell from the Lurgan bowlers.

First blood went to Lurgan as Andrew Gray joined Parks at the crease in the ninth over, before a bowling change allowed for an increase in scoring rate.

Gray looked to get into his stride and plundered 14 runs off the first three balls in the 15th over, before the 40 partnership was broken when Peter Maxwell was introduced to the attack, removing Gray (27) courtesy of a stumping, leaving the score at 50-2 after 17.

Victoria looked to rebuild as they approached drinks with Parks and Garry McClune, with productive but low risk scoring shots. However, the partnership was broken unnecessarily as Parks (24) came back for an ill advised second run.

Jamie Hanna looked comfortable but was also accounted for by Maxwell, who soon picked up a third as McClune looked to go through the gears at the other end.

Victoria still looked on course for a competitive total before McClune (28) was left stranded in the middle of the wicket following a bad call.

The score was now 97-7 and the remainder of the tail capitulated, as Maxwell took a further three wickets in eight balls leaving Victoria, who had been on 50 for the loss of only one wickets, bowled out for 110.

Victoria had their work cut out as they tried to defend a low total but got off to a great start as Thomas Greenaway struck with the fifth ball of the innings courtesy of a diving catch at cover by Parks.

Greenaway followed this up with a further wicket, caught by Gilpin, in his next over and Lurgan were stuttering at 5-2.

Th partnership between Stephen Johnston and Jack Maxwell took the game away from Victoria as they reset and then went after any loose bowling, finding the boundary with worrying regularity.

When a change of bowling and the introduction of Andrew Gray brought about a breakthrough, the partnership of 91 had put paid to Victoria’s chances and the game finished in a seven-wicket defeat.