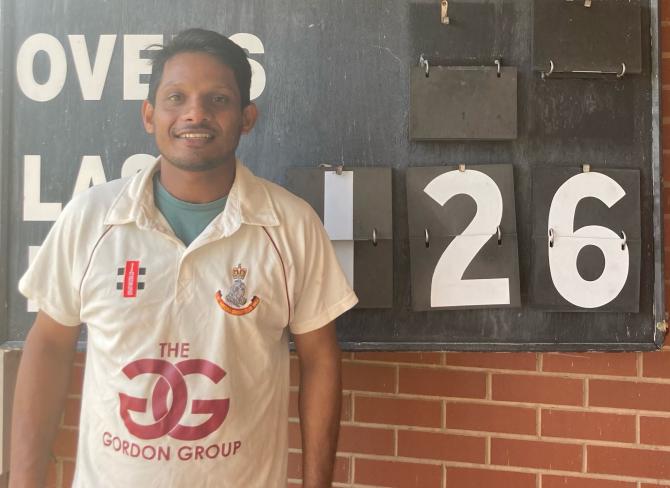 Boby Babin proudly stands beside the scoreboard in Lurgan Park, showing his 126 runs for Victoria.

Victoria strengthened their position in second position in the league and distanced themselves from the chasing pack, with a scintillating performance with the bat from Bobby Babin.

A fast start from Victoria was undone when Matthew Parks was dismissed early after finding the boundary three times.

Andrew Gray looked to push the score along, supported by Robert Black and then Garry McClune.

80-3 soon became 95-5. This brought Boby Babin to the crease, fresh from his unbeaten maiden half century against Larne last week. The all-rounder picked up where he left off last week,  smashing his first two deliveries for 6 and a further boundary before the end of the over.

A potential turning point in the game came when Gray (46) was dismissed, giving Ards a glimmer of hope that they could wrap things up.

David Gilpin joined Babin as the pair took the game away from Ards. Gilpin played his part in seeing off the remaining overs from Ards’ main bowlers and Babin gave a display of batting has not been seen in Lurgan Park for some time.

Babin raised to his half-century in only 21 balls, with six fours and four sixes.

The fielding side rotated their bowlers, to no avail, as the onslaught continued at the same pace. Gilpin batted cleverly, finding gaps and running singles within the circle to get the irrepressible Babin on strike as he reached his century to the delight of the home crowd, taking 43 balls.

The century partnership between Babin and Gilpin was reached, before Babin was eventually dismissed for 126 from 59 balls, including 10 fours and 12 sixes.

The Ards fielders paused to applaud and shake hands, while the Lurgan Park crowd rose to its feet in recognition of the amazing feat which they had witnessed.

If Ards relaxed, Joshua McClune soon made then switch back on, finding the boundary off his first ball, racing to 23 off 10 balls. His dismissal did slow the scoring somewhat as Gilpin (18) departed after a vital innings, leaving Jordan Walsh to smash to boundaries off his first two deliveries to finish the innings in style, to set a total of 285.

After a long afternoon in the field in searing heat, Ards had an uphill task, not helped by an early breakthrough; Greenaway taking the wicket, caught in the deep.

A double breakthrough from Joshua McClune was followed by an immediate wicket for Gray. At 29-4 after 8 it looked as though it would be a short second innings. However, the Ards middle order provided resistance.

A further wicket from Gray broke the partnership, but it was the introduction of Roshan Jose, on debut, that was needed to wrap up the game. Greenaway picked up his second of the game while Roshan struck three times to give Victoria a large win by 182 runs.

Victoria 2nd XI travelled to Muckamore on Wednesday evening. Victoria lost the toss and were asked to field first.

Sammy Irwin and Josh McClune opened the bowling. Irwin took (4-11) in his four overs to remove the top order, with a brilliant display of swing bowling.

Darren Vennard (1-21) and Jonny Irwin (1-8) replaced the opening bowlers, taking a wicket each, before Muzamil Hafiz (2-16) and Ben Johnston (1-11) finished the innings off, bowling Muckamore out for 79.

Josh Woods and Matthew Green opened the batting. Both were watchful as the ball moved about, but Green departed. Vennard (13) came to the crease and tried to up the tempo, but two quick wickets gave Muckamore a sniff. With Woods (23*) still at the crease and Josh McClune (19*) counter-attacking, Victoria got home with six overs remaining, winning by 6 wickets, bringing them joint top of the league.

On a very hot Friday evening Victoria 3rd XI travelled to the Mall to play Armagh. The evening started well, Victoria winning the toss and deciding to set Armagh the challenge of bowling first in the heat.

The opening pair of Caleb Boomer and Hafiz took a couple of overs to settle into a rhythm, but the experienced pair scored with some fantastic shots all round the ground with Hafiz in particular dispatching three large 6s.

A change in the bowling brought a change in fortunes and Boomer (26), vice captain Daniel Greenaway, Hafiz (45) and then Roshan Jose all fell in quick succession leaving the scores 90-4 off 12.

Jonny Irwin, who hit the shot of the day with a flat 6 straight down the ground, added 11 not out, which saw Victoria set Armagh 147 to win.

Wickets were hard to come by early doors for Victoria in the field, but some tight bowling allowed Stuart Copeland to strike in the 6th over, getting A. Wilson for 21.

With the changes in the 7th and 8th over to Hafiz and J Irwin, the runs dried up and the wickets tumbled much like in the Victoria innings.

Hafeez got one wicket for six runs in his first three overs bowling, Walborn and J Irwin claiming 2 for 10; bowling opener Mann and rapping the pads of Brownlee for an LBW, leaving the score 63 for 4 off 13.

Jose was then brought into the attack at the death and did not disappoint, taking 2 for 4 off his first over, claiming Nicholson and Gardner both bowled.

Copeland and J Irwin returned for their last overs and ended the contest leaving Armagh all out for 102 off 18.3 overs and Victoria with a win by 44 runs.