Donaghadee-light for Victoria as locals keep pressure on Superkings 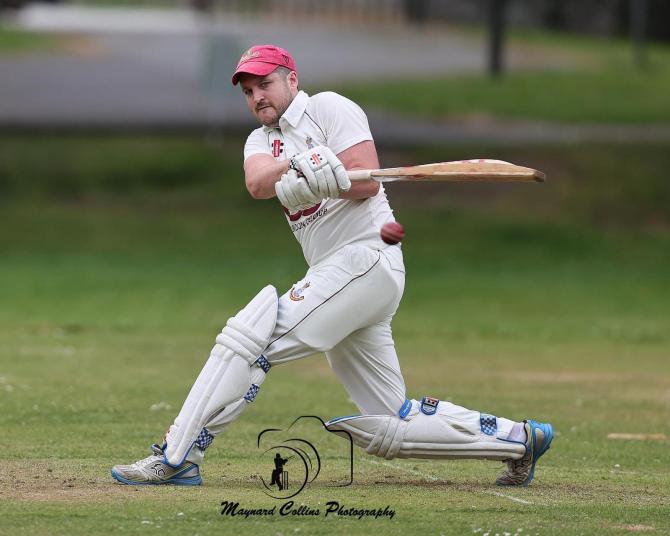 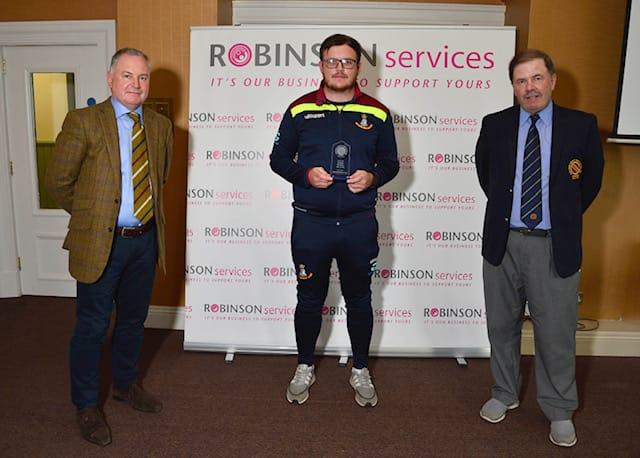 Andy Gray receiving the NCU award on behalf of Boby Babin for his recent century.

Victoria travelled to Donaghadee knowing that a win would keep them in second place and continue the pressure on Drumaness Superkings at the top of the league.

After Victoria won the toss and bowled first on a cloudy, damp day, Donaghadee got off to a good start, going at six an over within the first six overs.

Enter Joel Davison and the ever-reliable Boby Babin with Davison picking up the wicket of Gilroy with a brilliant delivery. Rising to the challenge, Babin matched this effort as he got fellow opener McNamara with a peach of a delivery, nearly taking the stump out of the ground.

When Babin got the third wicket of the day Victoria had mounted a comeback and Donaghadee were 56-3. Captain McCluskey along with Houghton mounted their own comeback with a fourth wicket partnership of 67, McCluskey in particular hitting some powerful strokes.

David Gilpin then got him out caught at deep long off by Roshan Jose for a well-made 52, Babin then picked up his third and again Victoria were fighting back.

This brought the left-handed Adams to the crease who made an excellent quickfire 50 as he and Martin put on 70 for the sixth wicket frustrating Victoria massively. At the death Josh McClune was reintroduced and picked up two wickets in a maiden overs to stem the flow of runs but by that stage Donaghadee had made a very competitive 204.

To win the game, Victoria would have to successfully chase over 200 for the first time since 2013. Opening the batting, Victoria didn’t get off to a great start losing Ross Crockcroft and the ever reliable Andrew Gray cheaply. When Jamie Hanna also went, Victoria were 12-3.

Victoria looked to rebuild with Matthew Parks and Jose. After a couple of boundaries Jose (17) was out caught behind Victoria were 36-4 and staring down the barrel. Enter Babin as he and Parks steadied the tide. Babin as per usual playing the aggressor, hitting some huge blows leg side and straight in a brutal knock of 47.

Captain Parks wasn’t short of a few boundaries himself, playing some lovely strokes through the covers and pouncing on anything short. When Babin went for 47 the score had been brought up to 125-4, after a vital partnership of 89. Parks then brought up his 50, a knock of superb composure and strokeplay, coupled with incredible patience.

After a couple more wickets Donaghadee were right back in it. Joel Davison entered and he along with Parks took Victoria to near the brink of victory and Parks accelerated after passing 50, striking 31 from 19 deliveries. Davison played with a calmness and maturity which belied his inexperience with the bat at this level. Parks perished caught behind for a wonderful 81, breaking a 39 run partnership. A brilliant knock from the captain who shouldered the responsibility of a big run chase, departing with 16 needed.

Thomas Greenaway (9) also went but not before he scored a crucial boundary and a three. The score was 199-9 and it was left to number 11, Jordan Walsh, who needed six off the last over. Walsh clubbed two fours over the mid-wicket region which was met by roars from his team mates as Victoria got over the line.

A thrilling game which both teams played their part in an important win for Victoria, keeping their very impressive season going, led by captain Parks and his superb knock.

Victoria made good use of the conditions to bowl in as they bowled CIYMS out for 92 in 23 overs with a good bowling and fielding performance. Matthew Green (2-16) and Ben Johnston (2-18) were the pick of the bowlers, and Jake Hanlon was excellent in the field with a brilliant run out and two excellent catches.

After a watchful start with the bat Victoria lost two quick wickets. With Matthew Green still there and Patrick McVey coming to the crease they started to counter attack and took the game away from CIYMS. Green fell for 33 and McVey for 18, with the job nearly done, Adam Stirling (11*) and Sammy Irwin (6*) seeing Victoria over the line with 8 overs left.

This brought Victoria top of the league on their own with a big game to come on Saturday against 2nd placed Dundrum.

On Friday evening the 3rd XI travelled to Dundrum and after losing the toss were put out to field. Victoria started strong with Sammy Irwin (3-11) taking some early wickets along with one from Jonny Irwin, with one of these wickets being courtesy of a one handed diving catch on the boundary by debutant Adam Gilchrist.

After this early period however,  Dundrum became settled and began to pile on the runs. It was as they were aggressively attacking that Hafiz Muzamil struck to take a key wicket which was quickly followed by Adam Stirling taking one at the other end.

Matthew Green and Jonny Irwin came in to finish off the innings and bowled nicely at the death with Green taking 3 wickets off, to prevent Dundrum finishing with a flurry. This left Victoria with a target of 114 runs to win.

Victoria came in to bat with Caleb Boomer and Green opening. Victoria did not get off to a dream start as Green and his replacement Daniel Greenaway fell early from subsequent balls. Muzamil then came in and formed a fine a partnership with Boomer as they took control of the game before Muzamil eventually fell having added 37 runs to the score.

Stirling and S. Irwin came in help Boomer (45no) across the line as Victoria ran out winners by 6 wickets.