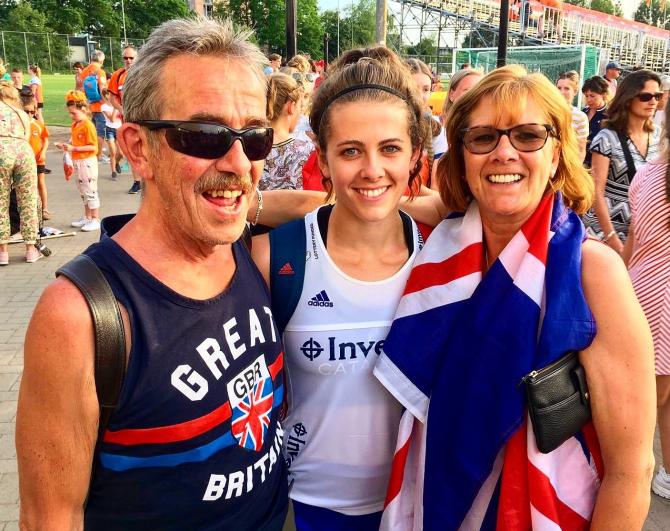 PROUD PARENTS: Frank Toman, who played for Armagh in the 1977 All Ireland gaelic football final, and wife Janice with their Great Britain hockey star daughter Anna.

TEAM GB’s 65 medals at the Tokyo Olympics just completed matched their huge haul from the memorable London 2012 Games, but the bronze secured by the women’s hockey team had particular resonance in Orchard county circles.

That’s because Derby-born Wimbledon defender Anna Toman’s parents both came from Lurgan originally and her dad Frank played gaelic football for Armagh in the 1977 All Ireland final against Dublin.

A 5-1 defeat in last Thursday’s semis by the mighty Dutch, who went on to beat Argentina 3-0 in the final, ended Great Britain’s reign as Olympic champions, having claimed gold for the first time ever at Rio 2016.

Toman’s team had to bounce back quickly to battle for bronze some 48 hours later against an Indian side inspired by the country’s men winning the corresponding game the previous day, and it turned into a real thriller.

Playing in red, Great Britain had a couple of penalty corners in the opening period and the Indian goalkeeper was required to make several saves, but it was still 0-0 at the end of the first quarter.

It was a very different story in the second as GB took the lead inside 30 seconds and went 2-0 up before being rocked by the concession of three goals in a catastrophic period of four minutes to turn the contest on its head.

Playing in their first Olympics, local ace Lizzie Colvin’s Ireland team had targeted their group game against India, who they beat in a penalty shootout in the 2018 World Cup, for a win which could take them through to the quarter-finals.

The girls in green were gutted to be beaten 1-0 by a late goal but that result was put in context by India going on to shock the winners of the other group, Australia, in their first knockout game and then this performance against GB.

At 3-2 up, the momentum was with India so half-time came as a real relief for Great Britain and they drew level five minutes into the third quarter before scoring what would prove the winner from a penalty corner early in the last period.

Although Great Britain came into this tournament as reigning Olympic champions, they have experienced turbulent times in the intervening five years, including going through three head coaches and some 40 players in the cycle.

Along with losing several leading lights of the history-making squad from Rio to natural retirement, others such as star forward Alex Danson had to stop playing due to serious injury issues.

So, rather than feeling like a lost title, claiming bronze in Toyko was a satisfying triumph for an emotional Great Britain team who had won their group games against South Africa (4-1), India (4-1) and Ireland (2-0) while losing to Germany (1-2) and Holland (0-1).

After finishing third in their group, they needed a penalty shootout to get past Spain in last Tuesday’s quarter-finals with legendary goalkeeper Maddie Hinch saving all four opposition efforts just like she had done against the Netherlands in that famous final in Rio.

The incredible Dutch got their revenge in Tokyo en route to a fourth gold but bronze meant almost as much in the circumstances to Toman and her colleagues as a GB hockey team medalled at three consecutive Olympics for the first time ever.

The 28-year-old, who has now won 99 caps between England and GB, broke into this set-up just after that high in Rio and she has become a leading light in a much-changed group seeking to secure fresh success for themselves.

They have faced adversity along the way and, in last Saturday morning’s bronze medal match, had to contend with temperatures reaching an astonishing 42 degrees as they tried to come from behind, but GB got the job done and deserve great credit for their resilience.