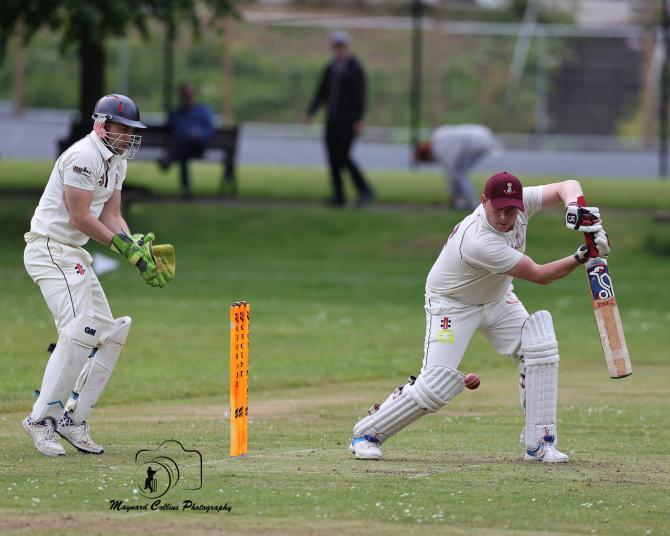 Victoria 1st XI entertained Dunmurry in a 20 over rearrangement.

On losing the toss, Victoria took to the field and started well with the ball.

Thomas Greenaway struck in the third over of the match and this was followed up by a maiden from Joshua McClune.

Pressure continued to build when Greenaway struck again. Following a tight opening spell from both ends, David Gilpin was introduced and took his customary early wicket with the second ball of his spell.

The run rate was well and truly halted with the introduction of Boby Babin, who bowled two consecutive maidens when introduced to the attack, taking a wicket in the process as the Dunmurry batsmen failed to deal with his unerring accuracy and pace, leaving the score on 53-4 after 12 overs.

The Dunmurry innings was anchored by their captain, Rakesh, while wickets continued to fall with regularity at the other end - Gilpin picking up his second and Roshan Jose striking with his first ball in the 17th over.

Andrew Gray took two in two balls as the innings approached the close, including that of Rakesh, as Dunmurry finished on 102-9.

Victoria began their run chase productively, running well between the wickets, as Jose found the boundary early on. Sixes from Jose and Gray got Victoria well in front of the DLS target, if it came into play.

A change in bowling from Dunmurry slowed the scoring rate significantly, although Jose did well to continue to take singles off almost every delivery he faced during this period of play. Gray (25) departed in the 12th over, after a 59 run partnership.

A six before and after Gray’s dismissal from Jose preceded his own dismissal, for a valuable 35 off 36 balls. A flurry of wickets followed as five wickets fell in as many overs, as Lurgan Park became increasingly dull, gloomy and wet, making it extremely hard for batsmen to come in and pick up the ball early.

Victoria were now inching towards their target and were indebted to Garry McClune, who stuck around despite the constant flow of wickets and showed composure to see Victoria over the line, clearing the boundary before piercing the field for the four which sealed victory for Victoria with nine balls to spare.

- Victoria 2nd XI travelled to take on Dundrum 2nd XI in a rearranged top of the table clash on Thursday evening.

Dundrum won the toss and batted in order to make the most of the good light. Victoria’s bowlers bowled well, but conceded too many wides.

Ben Johnston, who took 1 for 13 from his four overs, and Ross Cockcroft (3-23) were the pick of the bowlers. Johnston’s impressive spell brought the run rate back under control after Dundrum had reached 75-3 after 10 overs. Dundrum finished on 127-6 after 20 overs.

Victoria’s batting innings never got going after a slow start. Scott Armstrong (32no) came in and tried to hit late boundaries, but with the fading light and plenty of men back, Victoria fell 28 runs short finishing 99-2.

Victoria were left to rue a slow start with the bat and now needing to win their last three games to guarantee promotion.