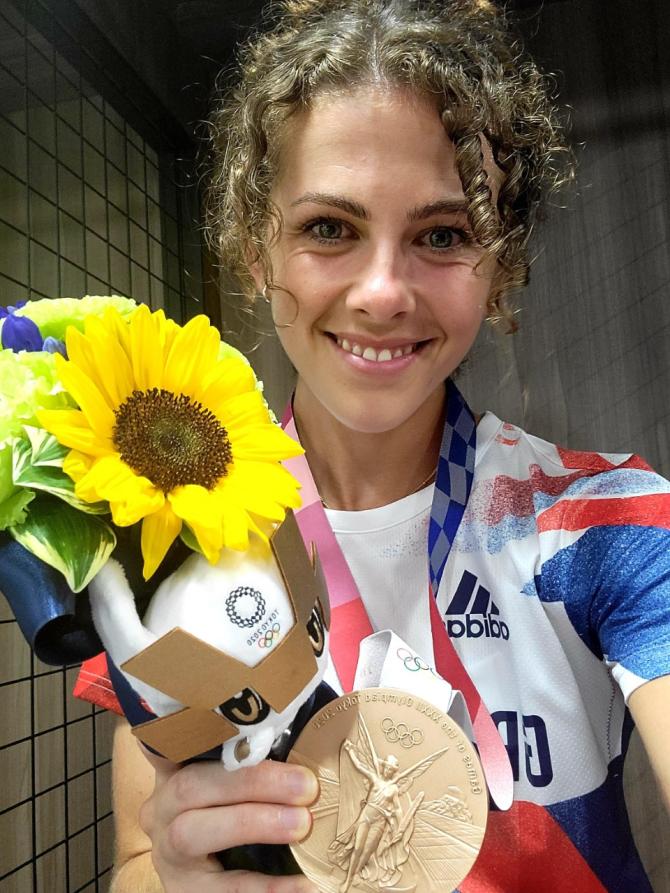 GOOD TIMES: hockey star Anna Toman won a bronze medal with Team GB at the Tokyo Olympics and has now signed to play professionally for a top Dutch club.

TOKYO Olympics bronze medallist Anna Toman, the Team GB hockey star with the Orchard county roots, will be plying her trade in the top professional league in the world this season after signing for leading Dutch club Stichtsche.

Her dad Frank Toman played gaelic football for Armagh in the 1977 All Ireland final and orange has been a very vivid colour in Anna’s own sporting career, with the Netherlands dominating the genuinely global sport of women’s hockey.

World champions Holland regained the Olympics crown from Great Britain at this summer’s Games in Japan, where Toman’s team were nevertheless delighted to claim bronze after a difficult few years as she explains in an in-depth interview inside today’s Ulster Gazette.

Postponed from last summer due to the coronavirus pandemic, Tokyo 2020 was a very special experience for the 28-year-old Derby-born Toman, but circumstances mean that she has moved on quickly to an exciting new career chapter playing overseas.

“This move hasn’t been on the cards that long, I just got approached after (playing for England in) the European Championships in June, which the coach at my new club here in Utrecht had been watching closely,” she reveals.

“Our England goalkeeper Maddie Hinch had played for this club for a couple of years and they went through her to get in touch. I wasn’t particularly wanting a move abroad, because for one thing I thought I might like a break from hockey after the Olympics.

“But Stichtsche is one of the top four clubs in Holland, so one of the very best in the world as this league is so strong, so I was extremely flattered to be approached and thought that I should have the conversation with them at least.

“To have this opportunity is incredible, there’s no club league like this in the world, so although it has been a bit of a whirlwind with Tokyo, the medal win and then coming here so soon, it’s hugely exciting and I feel extremely privileged,” enthuses Toman.

Centrally contracted as a lottery-funded full-time professional, Anna acknowledges that, whatever about the idea she’d had of taking a post-Tokyo break to recharge her batteries, this is the right time in her hockey career to spread her wings and accept a new challenge.

“This is the year in hockey terms to take up a great opportunity like this as the GB programme doesn’t start again until January and it was decided to allow us to take up options to play abroad with no requirement to be back until May,” she explains.

“I’m currently staying with a family from the club but am going to be moving into a flat. The people are so welcoming and want to help you out. I’m finding the experience very enjoyable so far and there’s such a complete passion for hockey here.”

Certain countries have particular passions for specific sports and the Netherlands seems to be to hockey what India is with cricket or New Zealand for rugby. The fact they have a professional domestic game for females says it all.

“They just love hockey here. Although successful, my club wouldn’t be one of the bigger ones in the league, but has 6-7 pitches and so many people play. The amount of kids involved in hockey is just incredible.

“Hockey is undoubtedly the top female sport in Holland, players are seen as celebrities here and of course the Dutch team have had such success, which in turn attracts more money including commercial sponsorship.

“All club players in England have jobs but here we train three days a week, with long sessions, and have dinner together at the club afterwards, so I don’t know how it would be possible to replicate this in other nations anytime soon.

“As such an advocate for club hockey in England and wanting it to be as strong as possible, I did have to wrestle with whether me coming over here was justifiable, but anything that can make me a better player is beneficial for hockey in my own country.

“The standard is so high, with players from as far afield as Australia and Argentina along with all the top Dutch players and there are five of us from the GB Olympics squad in myself, Maddie Hinch, Lily Owsley, Hannah Martin and Shona McCallin.

“There are a number of GB men’s players over here too this season. I think the men are still paid more, but both genders get good crowds. We play for traditional hockey clubs rather than them being franchises, so the roots are strong in local communities.

“Although there’s a good geographical spread, Holland as a country is so much smaller. I’m based in Utrecht with my club, but that’s just half an hour from Amsterdam, so there’s a lot less travel than back home, which is fantastic.

“I’ll be playing alongside a couple of the Dutch gold medallists from Toyko – the third Stichtsche player in their Olympics squad has retired – and am looking forward to that. I wanted to come here while still playing at international level, to improve my game.

“It’s also a good life experience, living in a different country, and the language is an added dimension. My clubmates can all speak English but team business including coaching will be conducted in Dutch and I think that’s reasonable enough.

“Our coach is actually an Aussie, but he’s here 15 years and is fluent in Dutch. I’ll learn hockey phrases and can go to him to help me out when needed, but I’m sure communication on the pitch will be interesting at times!” says Anna, who was making her debut on Sunday.

This move means Toman, who has been tipped as a possible future England and Great Britain captain by local Ireland ace Lizzie Colvin, will likely have to wait until next May or June to win her 100th international cap.

Since coming into international hockey at the start of 2017, the Wimbledon defender has missed just one out of the last 100 capped matches for either England or Great Britain, a tribute to her class, consistency and fitness.