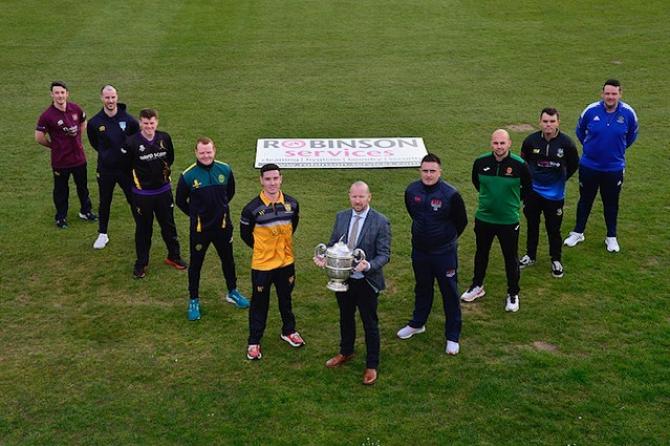 Ahead of the start of the National Cricket Union season this weekend, Your Lurgan caught up with the captains of four local clubs to assess how preparations have went and their hopes and aims for the next few months.

Matthew Little (Donaghcloney Mill), Lee Nelson (Waringstown). Matthew Parks (Victoria) and Jack Harrison (Lurgan) will all hope to lead their respective sides to glory once the first bowl is thrown towards the wicket.

Waringstown, who won the Robinson Services Premier League last year, could be set for even better things, according to captain Lee Nelson.

“We are very much looking forward to the season getting underway tomorrow,” he continued.

“We have revamped our squad, there are new faces in and I think when you have success, it is important to freshen things up.

“To win the Premier League was a great success for us as we had lost a couple of players and were sceptical about how things would go. However, after a poor start, we got our momentum and went on a long unbeaten run.

“Things are set to go from 0 to 100mph in a space of a couple of weeks as we have four senior squads, a women’s team and a junior section, so it’s going to be busy.

“We start with a home clash against Woodvale who are a good team with a few former Waringstown players, so that will add to it, but to be honest the standard has never been higher, so you need to be playing at your best to win.

“This is my second stint as captain after a three year spell earlier in my career and I see it as an honour and a privilege and a role that I’m enjoying immensely.”

Victoria, who will be competing in Robinson Services League 2, get their campaign underway with an away clash at Larne.

The Lurgan Park side narrowly missed out on promotion last year, as well as success in the T20 bowl, but captain Matthew Parks is hoping they can continue their strong form heading into the 2022 season.

“We’re looking forward to the new season. We’ve been practising from February and had a number of new faces, who are all pushing for places, which should keep those selected on their toes,” he said.

“We have a difficult start away to Larne. They have a number of dangerous players, but we want to hit the ground running and continue our form with bat and ball from last season.

“We were runners-up in the league last season for the first time since 2013. We also reached the club's first ever NCU Final, narrowly missing out in the T20 Bowl.

“The leagues have been rearranged so there won’t be any easy games for us this year, but we won’t be making any excuses. We have a squad now who all have lots of 1st XI experience. This is a chance for them to take their game to the next level. We travel to Lisburn II in the Junior Cup which will be a real challenge but one that we’re looking forward to.

“The 2nd XI are captained by Patrick McVey for the first time. They have been knocking on the door of promotion for the last couple of seasons and that has to be the aim this year. Patrick is keen to get players stepping up to take responsibility as they push for promotion and make a push for places in the 1st XI.

“Peter Martin continues as captain of the 3rd XI after a successful year last season. There is an increasing number of young players, learning their trade, along with more experienced players with plenty still to give. Many of the new faces at training will make their debuts in the 3rd XI and they’ll be hoping to impress.

“Sponsorship is vital for the club. We’re reliant on our main sponsor, the Gordon Group and we really have to thank them for the continued support alongside long-term sponsors like Maloney’s Diner and the Mechanics’ Institute.

“We also ran a player sponsorship last year, which really helped us out financially, as every player found a local business to sponsor them. We’re running this again this year and are grateful to all the businesses that take part. We hope to do them proud on and off the pitch.”

Heading into Robinson Services League 1, we caught up with Matthew Little who has skippered Donaghcloney Mill for the last five years.

The Cloney start their season at home to Saintfield tomorrow and Little is hoping for some improvement on their league position.

“We are looking forward to getting back at it,” he added.

“We finished in the bottom half last season, I think it was 8th, but we have a good squad and a good unit for this year.

“Due to other sport commitments, we might struggle for the first few weeks as four or five of our squad play rugby for Banbridge but we won’t be using that as an excuse.

“With a first, second, third and fourth XIs, it is going to be a busy few months and it’s hard to pack everything in.

“Our hope is that we can get some younger players representing the first XI as our seconds won the Junior 1 division last year.

“We have a cluster of six or seven young players who should be ready to jump up in the future, and if they can maximise their potential, the club could be aiming for promotion in a few years time.

“This will be my sixth year as captain and who knows how many I have left as my body is aching a bit!”

Lurgan, who were promoted to Robinson Services League 1 last season, start their campaign against Dundrum – a side who also make the jump up a division.

Despite testing themselves at a higher level, captain Jack Harrison believes the squad has enough previous experience to pick up results along the way.

“We went down to Section 2 a couple of years ago but we felt we were good enough to play at Section 1,” he said.

“We have a few ex-Premier League players and we had a real drive at the start of last year to get promoted and thankfully we were able to make that happen.

“Our squad has players who have played at this level before and our younger members of the squad are more experienced and developed, so it will be interesting to see how they get on.

“We are looking forward to getting started against Dundrum who were also promoted and we want to get off to winning ways.

“We have a firsts and seconds squad here at Lurgan and there are also talks about maybe having a midweek team, so things are certainly busy.

“This will be my third year as skipper but to be honest, it’s been a bit stop-start due to COVID, but last year was my first full season and I loved it.

“I have asked senior members of the team who have previously been a captain for advice and they’ve been more than helpful.

“I just want to kick on now and test myself as a captain at a higher level.”