Lurgan A get season off to positive start 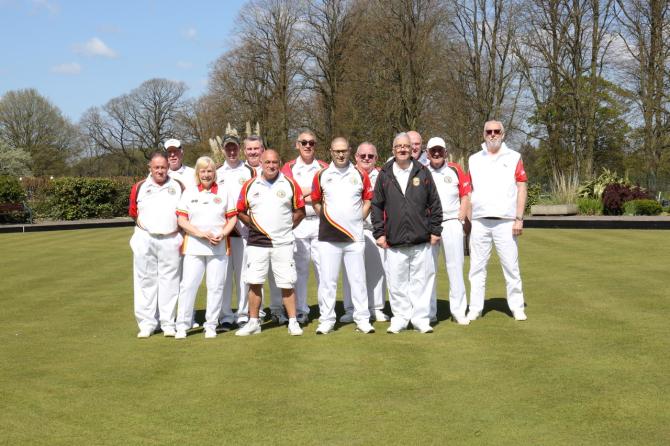 Lurgan A got the better of Banbridge on the opening day of the season.

Lurgan A got the season off to a great start with a 25 shot victory over neighbours Banbridge B at a sunny Lurgan Park.

Ivor Mitchell, Eileen Robson, Alan Briggs and Ronan Cregan, bowling on Rink 1, got off to the worst possible start losing the first 5 ends and by the half way stage found themselves 4-15 down.

By the 15th end, however, they had narrowed the gap to 6 shots and playing the last end there was only 1 shot in it. With one bowl left Lurgan were lying 1 shot for a draw but the Banbridge skip, Jim Major, played a running shot which pushed a short bowl in for the shot giving the visitors a 2-shot win.

On Rink 2 Dick McClune, Declan McCabrey, Harry Cosgrove and Alan Roberts were up against I Wright and gave the performance of the afternoon. 11-5 up at 10 ends the Lurgan rink only lost 4 of the remaining ends to run out 30-13 winners - an excellent result.

Victor Masters, Luke Donaldson, Peter Dew and John Gilliland faced G McAvoy on Rink 3. This rink had a comfortable afternoon and were never in difficulty. Leading 11-5 after 10 ends the rink continued to play solid bowls and finished up by 9 shots to win 20-11.

Over on Rink 4 Neil Sloan, Jeff McCullough, Iain Ferguson and Sam McCombes had a ding dong battle with Davy Pedan. The rinks could not be separated at the half way stage with the score at 9 each. Lurgan, however, gradually pulled away and led by 6 shots at 16 ends. Over the remaining ends Lurgan had to fight hard to stay in front as Banbridge B pulled back 7 shots against Lurgan’s 3 leaving the home side with an excellent 1 shot win.

Next week Lurgan A travel to Dungannon hoping to build on Saturday’s success.

Disappointing start for Lurgan B

Lurgan’s B Team made the long trip to Kilkeel last Saturday afternoon to play their first match of the season on a good running green but faced very strong gusty cross winds during the entire match.

The Lurgan side arrived with high hopes of an opening season win but were surprised by a stronger home side who took most of the spoils leaving the visitors to salvage just half a point from the match.

Gerry Devlin, Albert Houston, Mel Hamilton and Charlie Maguire on Rink 1 battled against Billy Collom’s rink and bowled well to be ahead 10-6 after the 10th end.

The Lurgan men were just one shot behind at the three-quarter stage but with the home rink taking control with full length jacks they eventually lost 19-15.

On the adjacent rink new member Nigel Lucas, Neil Harvey, Stewart Martin and Mike Parr led John Cummings’ team 14-9 after 15 ends and were hoping to come home with a point but the loss of 7 shots over the next 3 ends brought the home rink back into the game but held on to tie at 17-17.

The home rink skipped by Harold Henning proved troublesome for Dessie Simpson, John Murtagh, Roy Poots and Billy Strain on Rink 4 who were adrift by 8 shots after 8 ends. Strain marshalled his men to pull back to 18-12 after 18 ends but the gap was too wide to make amends with the visitors losing 19-13.

Next Saturday afternoon the B Team are at home to Antrim Lawn and are hoping for a good win. The match starts at 2 p.m. and spectators are most welcome.