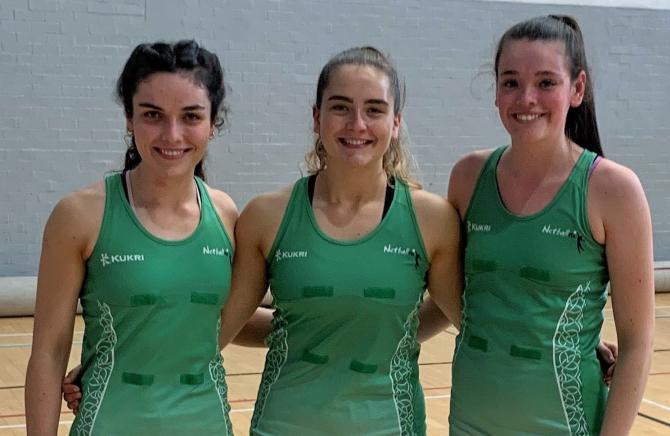 Cullyhanna's Frances Keenan (left), Michelle Magee and Lurgan's Dearbhla Coleman back in Gibraltar with the Northern Ireland netball team last October having first toured there with the U17s in 2016.

A number of months ago, a Dublin-based rugby journalist colleague was very surprised and intrigued to hear that Northern Ireland age group netball teams compete at international level on a regular basis.

We were discussing the turmoil in Irish women’s rugby and how dozens of the country’s top players, past and present, had written an official letter expressing a lack of confidence in the IRFU and accusing the governing body of failing the female side of the sport.

One damning indictment of the IRFU is that up until recently there hasn’t been any opportunity for female players to represent their country at age group level in the oval ball game other than sevens.

By contrast, Northern Ireland Under 17 and Under 21 netball teams compete in age group European Championships, which tend to take place annually, and the World Youth Cup is a huge highlight for the older of those sides every four years.

This isn’t chest-beating because, as a Netball NI Board member, one is under no illusions that we don’t do anywhere near enough for our elite players in terms of financial support and arguably let them down in infuriating fashion.

However, considering netball may be seen by many as a relatively obscure sport, which has no male juggernaut wing to piggy-back on and that the unit in question is just Northern Ireland rather than the whole of Ireland, this example puts the IRFU to shame.

Back in 2005, what became known as a golden generation of Northern Ireland netball, with local ace Caroline O’Hanlon as co-captain, came a superb sixth in Florida at the Junior World Championships, which has subsequently been rebranded as the World Youth Cup.

Giant goal machine Lisa Bowman captained the young greens in the Cook Islands next time round in 2009 and current Surrey Storm stars Niamh Cooper and Emma Magee had that honour at Glasgow 2013 and in Botswana four years later respectively.

The latter’s sister Michelle Magee would have been captain in Fiji last year but unfortunately the tournament was cancelled due to the Covid-19 pandemic, so she bowed out by leading NI Under 21s to European Championship silver medals in the Isle of Man instead.

Michelle Magee first captained her country when she led the Under 17s at a European Championships back in early 2016 and, along with county Armagh girls Frances Keenan and Dearbhla Coleman, she was back in Gibraltar with the NI senior side last October.

The benefits are obvious – from gaining very valuable experience and exposure to the best talent from other nations, to building relationships with future senior international colleagues, to putting themselves in the shop window for professional franchises in England.

Thankfully it looks like rugby may be starting to get its act together, with the establishment by the IRFU a new Women’s National Talent Squad and last month’s Under 18 Six Nations Festival, and we will look at those developments in more detail another time.