Sun shines on Lurgan A at Bessbrook 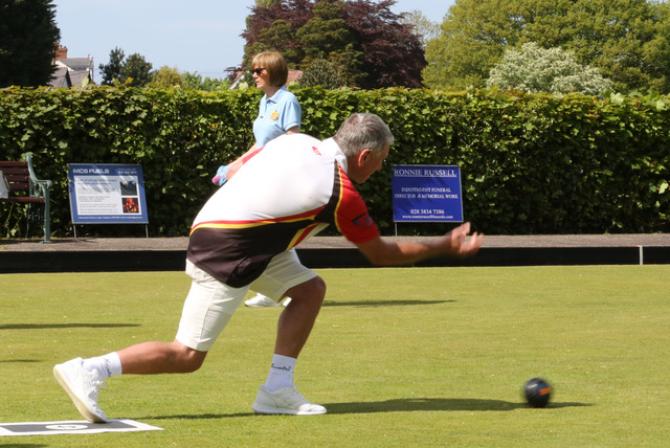 Brian Fitzpatrick delivers his bowl during Lurgan B v Lisnagarvey B.

Lurgan travelled to Bessbrook last Saturday and on a gorgeous sunny day and put up a magnificent rear-guard display to come home with a win by two shots and five points in a very close game.

Although going down seven shots after five ends Alan Roberts rink on No 1 put up a very strong performance and dominated their opponents to finish seven shots up 18-25 to maintain their unbeaten run.

Ronan Cregan’s rink found it hard going on No 2 and over the first five ends and were 6-1 down. However, over the next five ends Lurgan turned the game around to score nine shots to two to lead 8-10 at the halfway stage. Tight bowling in the second half of the game saw this rink over the line with a three-shot victory (15-18).

On Rink 3 Sam McCombes four struggled with the synthetic surface for a long time. At 16 ends they were 23-8 down and seemed to be heading for a big defeat but Sam rallied his rink and won the final 5 ends, collecting eight valuable shots to reduce the final deficit to seven shots, 23-16.

The final rink skipped by John Gilliland started well and led 3-5 after five ends but over the next 10 ends the rink struggled for consistency and at the 15-end mark were eight shots adrift at 17-9. A strong finish over the remaining ends saw the rink pick up eight shots to one to finish only one shot down.

This, along with Sam McCombes’ comeback, saw Lurgan over the line by two shots. A magnificent team performance to maintain their third spot in the league.

Next week Lurgan have a home fixture against Castle from Bangor with the match starting at 5.30pm.