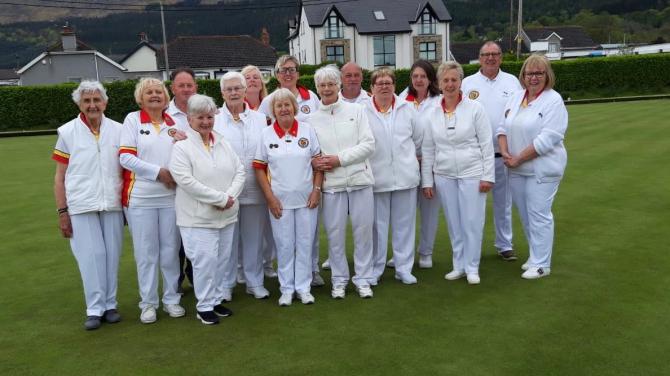 Lurgan Ladies with male support before their match at Whitehead.

Lurgan's lady bowlers kicked off the season in an away game at Newcastle and although the weather was cold and windy it didn’t dampen their spirits.

They were successful on three rinks finishing with an overall score of 72-49 with six well-earned points.

Buoyed by their success at Newcastle, the Ladies Team travelled to Whitehead for their second match of the season and were delighted to have two new members joining the team.

On Rink 1 skipped by Eileen Robson the team consistently met their opponents with tenacity, scoring five shots on both ends two and 11, leaving Whitehead finding it difficult to catch up; the final rink score being 28-11 in the Lurgan fours favour – a match-winning score!

The Lurgan four skipped by Doreen Wheelan on Rink 2 were trailing by eight shots after the fifth end but by the end of the 17th end there was only one in it with Whitehead 18 – Lurgan 17. It was all down to the final end to decide who would take this rink.

Whitehead scored one shot on the 18th end leaving Wheelan’s rink just 2 shots short of a win; the rink score being 19-17 in home side’s favour.

On Rink 3, skipped by Irene Doone, the teams were fairly even up to the 12th end with the scores sitting at 10-11, Lurgan then took 5 out of the final 6 ends and finished on an excellent rink score of 22-12 to claim another Lurgan point.

On Rink 4 skipped by Angela Thompson it proved a difficult rink, with no easy way if identifying the line on it. The home team took the first 6 ends but Lurgan made a valiant effort to pull back winning the next 8 out of 9 ends but Thompson’s rink fell short by 22-10.

Lurgan was successful on two rinks with an overall score of Whitehead 63 Lurgan 77 which resulted in five points well-earned away from home to go into second place behind Portadown.

Lurgan 1 had a torrid time at the hands of their Portadown rivals on their Green on Monday afternoon with the home team taking all the spoils.

Alan Briggs’ rink did not get to grips with the opposition throughout their match with Billy Martin’s men who won 20-11 and Harry Cosgrove’s four ended 23-12 down facing Noel Orr’s rink. All in all a good result for the Portadown team!