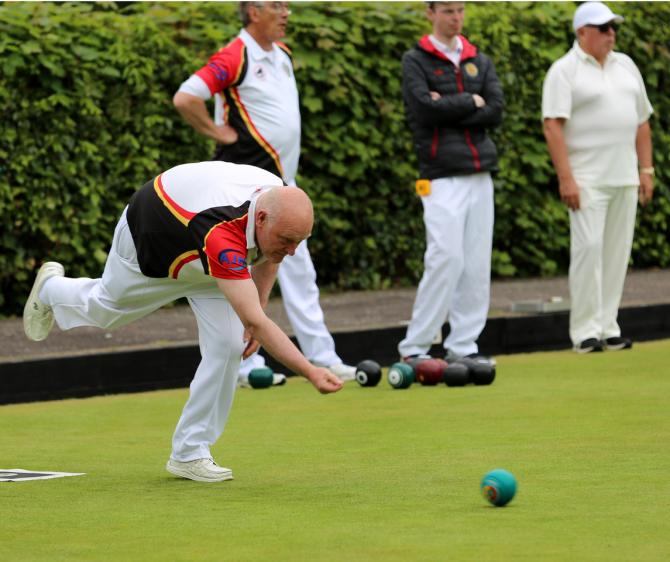 Lurgan A played Castle last Saturday evening in Lurgan Park to the backdrop of festival music from Brownlow House.

Thankfully the rain stopped as the players took to the green and the game was played in perfect conditions.

On Rink 1 Sam McCombes got off to a steady start and led Jim Corry 8-6 after 10 ends. Over the second half of the game the rink lost its way, scoring five shots to 12 to run out 13-18 down.

Sam’s last shot contributed greatly to Lurgan’s success when he went to the mat with six shots against him in head only to deliver a super bowl to miraculously take draw the shot.

Alan Roberts once again got off to a flying start Rink 2 and after 12 ends was winning by 10 shots, 18-8. Unfortunately the rink could only muster a further two shots, losing eight of the last nine ends to finish up all square at 20-20. Despite the disappointment of losing the last end on a measure, Alan’s rink maintained their unbeaten run.

Over on Rink 3 John Gilliland’s rink struggled to catch the green and found themselves 5-13 in arrears at the halfway stage. John played a couple of great bowls to compose the rink and, with the help of scoring 12 shots over three ends, took the lead for the first time in the game on the 15th end. The remaining ends were shared six shots each, leaving John with a well-earned victory 25-21.

The final game on Rnk 4 saw Ronan Cregan’s rink get off to a slow start with all four players struggling with the heavy green. After six ends the Lurgan four trailed by nine shots, 2-11.

However, at the halfway stage and with the help of a count of six on the 10th end, Lurgan managed to turn the game around to lead by one shot 12-11.

Determined not to lose this lead Lurgan finished strongly and led 18-13 at 15 ends and finished up winning 25-18 to secure the point and the overall team victory.

A special mention must go to Eileen Robson who had an outstanding game at second.

There is no game next Saturday for the A team has no match on Saturday but will play local rivals Portadown on the following Tuesday.