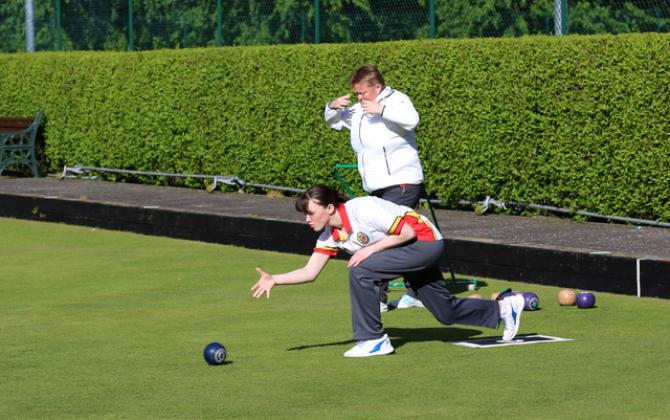 A superb delivery by Mia Patterson at Lurgan in the recent second NIWBA Pairs match.

Lurgan Ladies’ Team met Holywood away from home last Thursday for their third match of the season and were unfortunate to take just two points from the match, which the home team won by 23 shots.

On Rink 1, skipped by Irene Doone, the two teams were quite evenly matched and after the 10th end the score was 10-10. However, over the final eight ends, the Lurgan rink got six shots against Holywood’s two. Sadly it was just not enough with home rink winning 16-12.

Holywood took the lead on the second end with an impressive score of six against the Lurgan rink skipped by Doreen Wheelan on Rink 2. Although Lurgan fought hard they could not take control, even though they won the last five ends with the final rink score of 21-10 in the Holywood rink’s favour.

Angela Thompson skipped the Lurgan rink on No 3 where the teams were fairly even until the 10th end with the scores sitting at Holywood 8 Lurgan 7. Lurgan had an impressive score of five shots on the 11th end from which Holywood could not recover.

An exciting game ensued with a valiant challenge from the Holywood rink, who scored five shots on the final end but Thompson’s rink finished bravely 1 up at 17-16.

On Rink 4 the Lurgan players, skipped by Eileen Robson, found it a very challenging green and never got to grips with the game, eventually losing 22-15.

Lurgan were successful on two rinks with an overall score of Holywood 71 to Lurgan’s 58 which resulted in two points earned and still holding on to the runner-up position to Portadown, who are seven points ahead at present.