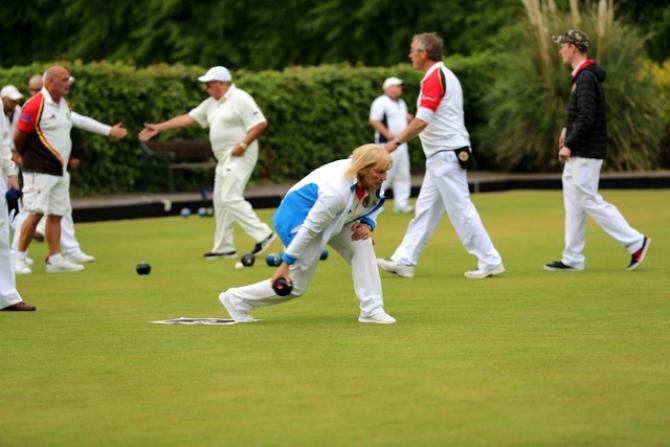 Eileen Robson bowling in the recent A Team match at home to Castle.

Ballyholme was the destination of the Lurgan Ladies Team last Thursday afternoon in the NIWBA Senior League and were not disappointed.

The team putting up a tremendous performance to win by a superb 25 shots and bagged six valuable points.

The Lurgan players on Rink 1, skipped by Eileen Robson, had a very successful match as they went against the Ballyholme four. Out of the 18 ends Lurgan won 14 resulting in a very impressive score, Lurgan 29 Ballyholme 4.

Doreen Wheelan was skipping on Rink 2 on a rink that proved to be more difficult for the Lurgan players. Although they won two ends with a score of 3 and 4 they could not catch up with their opposition, with the final score being 19-10 in home rink’s favour.

Rink 3 was skipped by Angela Thompson whose rink found themselves trailing after the sixth end by 2 to 7, this trend continued and the score after the 14th end Thompson’s rink was down 6-11 but after a huge turnaround at the 16th end the Lurgan took an amazing 5 shots for them to take the lead and eventually win 14-12.

Jennifer McVeigh skipped on for Rink 4 with the players from both teams being quite evenly matched with a score of 9-8 for the Lurgan rink after the 10th end. The remaining eight ends were dominated by Lurgan with a final score for McVeigh’s rink of 18-11 – an excellent win overall for a buoyant Lurgan team who must be up there in the final reckoning.

Lurgan were successful on three rinks with an overall score of Holywood 46 Lurgan 74 which resulted in six points earned.