Lurgan B loses out at Ormeau 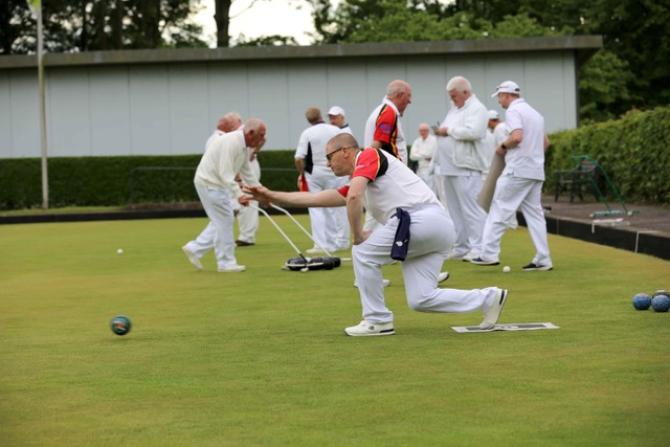 A great delivery bowled by Jeff McCullough, A Team Match Secretary versus Castle to rest very close to the jack.

Lurgan’s B Team could only salvage half a point away to Ormeau in their rearranged NIBA Division 3a match.

Their poor away record continued to haunt them as they lost by 21 shots.

Eamonn Quinn and his rink had quite a battle throughout with Moran’s home four; keeping in close contact in an admirable effort to collect a needy point. Quinn’s rink produced a strong finish coming from behind at 14-19 after the 17th end to have 5 shots in the head on the 18th only for Moran to reduce it one shot.

Quinn’s rink’s won the last two ends but unfortunately still lost marginally by a shot at 18-19.

During the evening Billy Strain’s men experienced difficulties with the tricky green surface to be 9-15 down after 12 ends. Strain encouraged his rink to up their game and to come close to the home rink at 18-14 after the 17th end but a strong finish by them caused the Lurgan four to be 14-23 adrift in the end.

On Rink 3 Peter Ruffold’s rink faced tough Ormeau opposition to be 10 shots behind after the 16th end. Although they reduced the deficit to 5 shots with a 3-shot win on the 19th a strong finish helped the Ormeau rink on the last two ends for them to win by 26-15.

Mike Parr’s rink tried hard to take a point from the match. Taking control in the second half they won the 11th and 12th ends by 3 and 4 to take a 15-7 lead which they built on during the remainder of their game and were looking good for a rink win being 6 shots ahead after the 18th end.

Hill’s Ormeau rink bounced back with a vengeance to win the last three ends but Parr’s rink held on stoutly for a well-earned draw to take a vital half point.

On Saturday the B Team are off to play a league match against Curran B in Larne and hoping to build on their excellent Cup win against them earlier in the season.