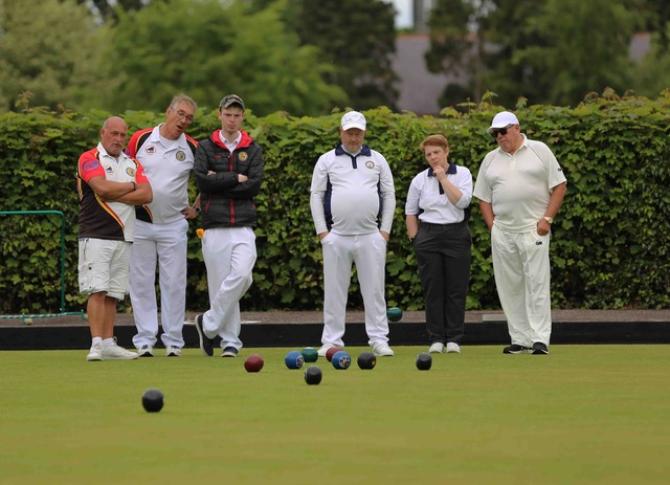 Lurgan bowlers pondering the head in a recent match

Having made a confident start, the Lurgan rink stretched their lead with an excellent five-shot win on the sixth end but O’Keefe’s rink responded with two and four-shot wins over the next two ends to go all square at 9-9 all after the 8th.

Cosgrove’s rink maintained their control with single and double-shot wins in the second half to run out worthy winners on the day.

Alan Briggs and his rink performed extremely well facing Will Steenson’s home rink to come back into their game from being four shots down at the midpoint.

They got well into their stride in the second half to outclass the local rink with a mixture of three and four-shot wins to finish outstandingly well at 26-18 ahead and secure the full points from the match.

Lurgan 2 were on losing end to local rivals Portadown going down by 6.5 shots but claiming a much welcome four points from Billy Strain’s winning rink.

His rink on No 1 had a close encounter with Syd Heasley’s but were going well with a five-shot lead after the 12th end.

Heasley’s Portadown rink struck back but in spite of losing the 15th to 17th ends a valuable two-shot win on the last end by the Lurgan rink saw them through to lender 13-12 win.

Sam McCombe’s rink were up against it when facing Billy Martin’s eventually losing 17.5-10.

Next Monday at 1.30 pm Lurgan 1 face Dunbarton while Lurgan 2 have a bye.