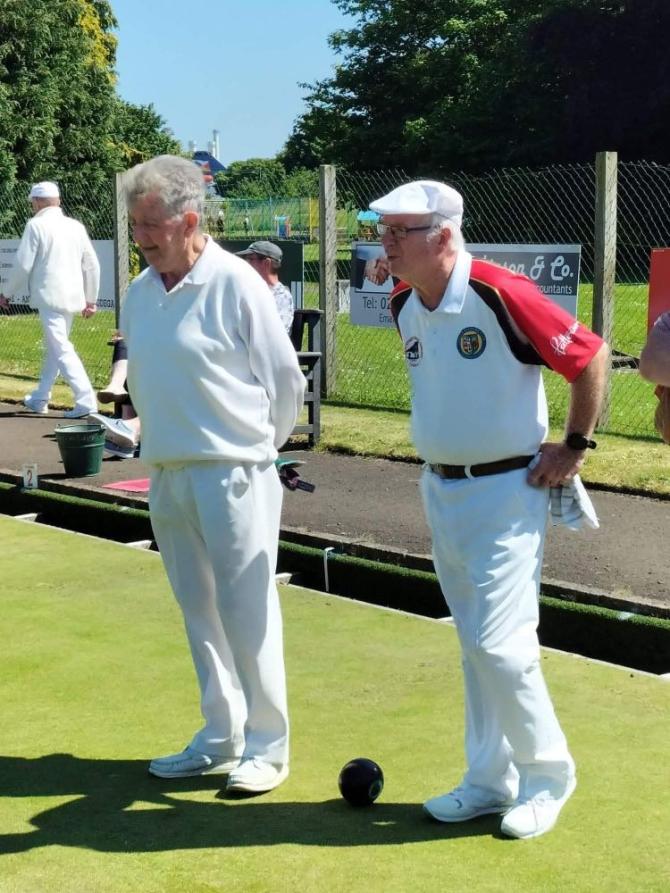 Charlie Maguire and Eamonn Quinn back-end players on the winning rink at Curran.

Lurgan Ladies had their first home match against Dungannon on Thursday, June 2.

Although the weather was wet it didn’t dampen the spirits of the teams with all the matches being closely fought resulting in a seven-shot win and 6.5 points for the Lurgan side to keep them close on Portadown’s tail.

On Rink 1 skipped by Eileen Robson, the match was very close with Lurgan getting off to a slow start and after five ends the score was 2-7. On the ninth end Lurgan took three shots which brought the score level at seven each. On the 15th end Lurgan took five shots that just brought them into the lead which they held with a final score of Lurgan 17-16.

Rink 2 got off to a great start with Lurgan leading by nine shots by the sixth end. Dungannon fought back and by the 15th end Dungannon were trailing by just one shot. Doreen Wheelan, skip of this rink, encouraged her team and in just the final three ends Lurgan got five shots, ending in a final score of 19-14 in her rink’s favour.

Angela Thompson skipped on Rink 3 where her team made an impressive start leading Dungannon by seven shots after the 11th end but the Dungannon four went on to take six out of the final seven ends with Thompson’s rink holding them to a draw with the final score being 14-14.

Jennifer McVeigh was the skip for Rink 4. After the first six ends Lurgan were trailing by eight shots, however Lurgan fought back and by the 15th end they were trailing by three, with an impressive four shots in the 16th end and two shots on the final 18th saw Lurgan take the rink by just one shot, with the score of 18-17.

Despite the wet weather all rinks gave exciting matches.

Last Monday afternoon Lurgan 1 played Dunbarton and put up a very good performance in their Zone B Section 4 match to win by eight shots and collect full points from the match.

Peter Dew’s rink were 12-2 ahead at the halfway stage and were looking to win. While Dessie Breen’s rink tried hard to get back into the game, the Lurgan 1 rink stuck to the task to finish 20-13 and contribute four points towards the overall win.

It was a tight run of Harry Cosgrove’s against strong opposition led by Dessie Breen, the Dunbarton skip.

The home rink was well up at 13-7 after the 12th end but lost out in the remaining ends, facing the strong bowling inspired by Breen. Although the Lurgan four dropped four shots over the last two ends they finished one shot up at 16-15 to ensure full points for the home side.

On Monday Lurgan 2 continues their league programme way to Markethill; while Lurgan 1 has a bye.