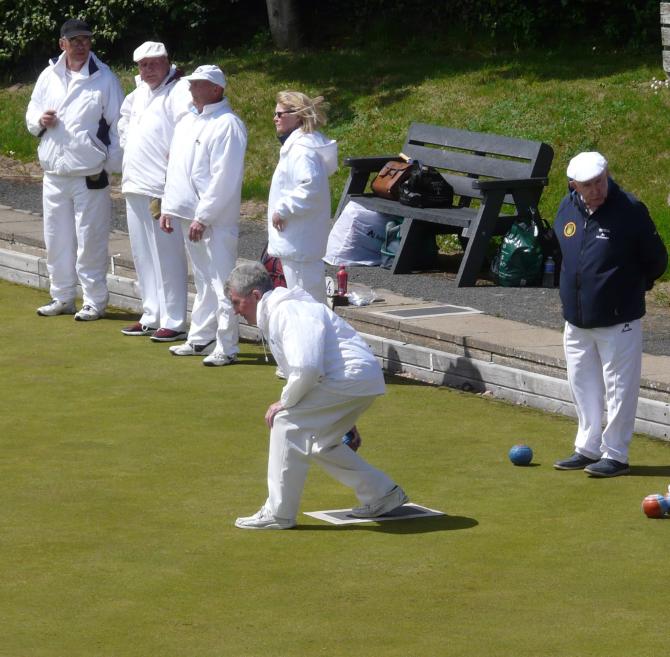 Charlie Maguire, Lurgan B skip, in action during the Rathfriland match.

Playing their seventh game of the season, Lurgan needed a good result last Tuesday evening to keep them on top of Division 2.

Against a strong Curran A side that completed the double over Lurgan last season, the home side played their best game so far and took six points to one to maintain their position at the top of the league.

Rink 1 saw Ronan Cregan against the enthusiastic young R Wallace. As happened so often this season the Lurgan four got off to a slow start and were 3-8 down after five ends. However, over the next 13 ends Lurgan scored 27 shots to four to move into a commanding position and run out winners by 31-20.

On Rink 2 it was good to see Sam McCombes’ four back on song. A brilliant display of bowling saw the Lurgan rink conceding only 4 singles throughout the whole game. Winning 35-4 was a superb effort and was Sam’s best result of the season.

The tightest contest of the evening was on Rink 3. After five ends Alan Roberts found his rink down 2-5 but by 10 ends the deficit had been reduced to just one shot, 7-8. Alan picked up five shots to two to take the lead at the three-quarter mark. All square at 20 ends, the game could not have been closer, with the game against, Alan played a great bowl to win and take an important point in view of the opposition.

Over on Rink 4, Lurgan suffered their only defeat. John Gilliland’s four were surprisingly off form and the rink could not get to grips with the green and went down 11-25 to a strong Curran four.

This result was very significant with Curran A being Lurgan’s main challengers for the Division Two title.

It has been busy week so far for Lurgan A with them entertaining Markethill in the League last Tuesday night and on Wednesday evening playing Curran again but this time in the NIBA Intermediate Cup. Then on Saturday they make the trip to Dublin to play Crumlin B in the third round of Irish Intermediate Cup and hoping for a place in the quarter-finals.