Good week for Lurgan A 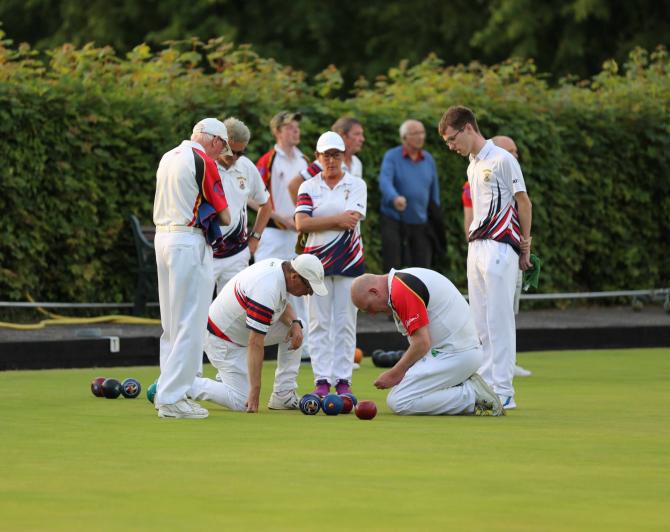 It's a very tight head during the Division 2 match between Lurgan and Markethill with Ronan Cregan measuring gingerly for shot.

In an impressive week Lurgan played Markethill last Tuesday evening in the league. Despite the absence of a few players on holiday, the home side produced a very good performance to win 113 - 50 and collected 6.5 points to keep them in the hunt for league honours.

On Wednesday evening Lurgan A entertained Curran A in the NIBA Intermediate Cup quarter - final. The home side were confident of a victory given their handsome win against the same opposition in the league the previous week.

However, the game turned out to be a nail biter. At the halfway stage Lurgan had a comfortable 13 shot lead but with five ends to go the margin had narrowed to 11 shots. Curran then rallied to level the scores.

With only one rink left on the green the Curran skip went to the mat with game against him. He took the lying Lurgan bowl out with a drive to put Curran in a winning position.

The Lurgan skip, Ronan Cregan, was fortunate enough to promote a Lurgan bowl to again to lie game but he Curran skip tried to drive again and missed to give Lurgan the victory by two shots to earn them a semi-final tie at home against North Down on Wednesday week.

Lurgan A flies through to Irish Intermediate Cup Semis

On Saturday Lurgan A travelled to Dublin to play Crumlin B in the Irish Intermediate Cup. Buoyant after their two victories during the week the Lurgan side settled into the game very well on a very fast green.

At the halfway mark the home side had a narrow lead 39-36. Over the next five ends, with the sun now on their backs, three of the Lurgan rinks managed to score heavily to give them a 16 shot lead by 48- 64.

For the remaining ends all four rinks put in a strong performance to see out the win 71-87.

This was a superb win for the Lurgan team who now face Private Greens’ side Falls at home in the quarter-finals on July 23.

Next week sees the return fixtures begin as the league reaches the halfway stage. Lurgan are presently top of League 2, 1.5 points ahead of Whitehead B. Lurgan A are away to Banbridge B next Saturday.