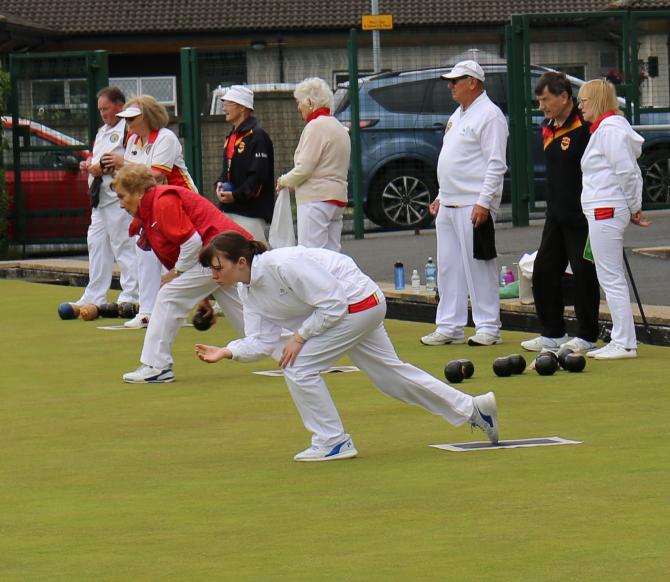 Mia Patterson, Lurgan bowler and a member of the Emerging Ireland Squad in action at Banbridge.

Last Thursday afternoon Lurgan Ladies travelled the short distance to Banbridge who they played in the NIWBA Senior League losing out by just 3 shots in a very tight game that went to the wire.

On Rink 1 skipped by Doreen Wheelan the Banbridge team were leading by three shots after the 10th end but Lurgan played a brilliant 15th end, scoring four shots and by the end of the 18th end the rink ended in a draw.

Angela Thompson skipped on Rink 2 where her team produced a winning score for the first 15 ends, however Banbridge scored four shots on the 16th end which resulted in a score of Banbridge 14 Lurgan 12. With the final two ends to play Lurgan tried to gain back control of the game but only got one shot on each, this resulted in a draw with 14 shots each.

Rink 3, skipped by Jennifer McVeigh had a difficult game with Banbridge leading 12 shots after the 11th end. McVeigh’s rink was able to gain eight shots in the final ends but it was not enough to bring them back into contention with Banbridge winning by 12 shots.

On Rink 4, skipped by Eileen Robson, both teams were evenly matched and at the 10th end the scores were Banbridge 8 Lurgan 9, then Lurgan took five of the final eight ends, resulting in a win of 21 shots against Banbridge’s 10.

Veterans teams Lurgan 1 and Lurgan 2 played each other in the local derby for the second time this season and the friendly rivalry was no different this time with match the being played in a good sporting spirit.

It resulted in a very tight finish with Lurgan 1 getting the win by a meagre 4 shots.

Alan Briggs’ rink on No 1 were six shots down after eight ends but an excellent 6-shot win on the 11th end put them ahead of Pete McGrail’s rink by 4 shots. This was the turning point for Briggs’ rink who finished well with a three-shot lead and to run winners by 21-18.

On Rink 2 Harry Cosgrove’s rink was in a leading position by nine shots facing Sam McCombes’ but were shocked by a thrilling comeback when McCombes and his men took two shots on the 17th end and an outstanding six shots on the last to finish just one shot short of a tie.

Cosgrove’s rink scrapped home by 19-18 but his win ensured the full points for Lurgan 1.

Next Monday afternoon Lurgan 2 meets Banbridge at home while Lurgan 1 has a bye.