Determined A team hold on to top place 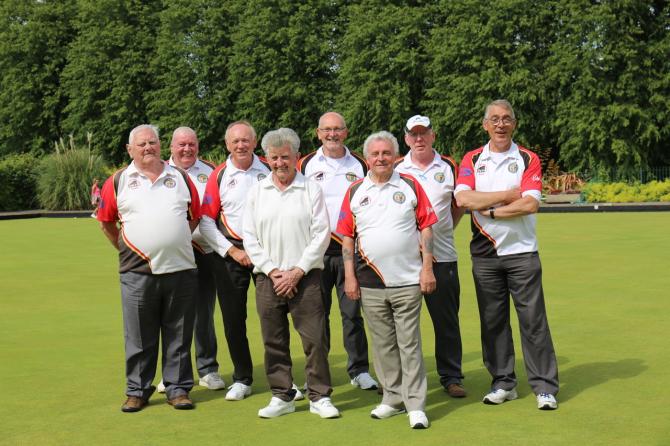 Having reached the halfway stage of the league last weekend Lurgan travelled the short distance to Banbridge to play their B team with the start of the match being delayed for ten minutes due to a very heavy shower and strong wind.

John Gilliland playing the very experienced Jim Major got off to a cautious start and after 5 ends was level at 6-6. The next 10 ends saw Lurgan lift the tempo winning 9 of them to put the rink in total control with a lead of 7-19. The Banbridge rink made a spirited comeback but could not pull back enough shots to catch the opposition. Lurgan finished with a healthy win 17-22.

On Rink 2 Alan Roberts started brightly and led 2-5 after 5 ends. Banbridge fought back over the next 10 ends and took a 1 shot lead into the last quarter of the game. Alan levelled the score on the 16th end but unfortunately lost 3 of the remaining 5 ends to go down by 2 shots. This was Alan’s first defeat in the league this year.

Sam McCombes’ four on Rink 3 got off to a blistering start and won 13 of the first 16 ends to lead by an impressive 28 shots to 3. Although he could not maintain this form over the last 5 ends Lurgan ran out victors 11-29. This rink has been in top form over recent weeks.

Over on Rink 4 we saw Lurgan’s second rink defeat. Although the rink has been going well all season the rink seemed to be off form in the windy conditions. In a low scoring game in which Banbridge never surrendered the lead, the Lurgan 4 entered the 17th end 7 shots in arrears 14-7. Needing 3 shots to tie the game Lurgan lay 3 and a measure for 4, however the Banbridge skip with his last bowl played a weighted shot to promote one of his own bowls in for third shot and secure a 1 shot victory for his rink.

There’s a big game in the Club’s history when the A Team plays North Down at home for a place in the final of the NIBA Intermediate Challenge Cup.

On Saturday afternoon Dungannon come to play Lurgan A come on the Park Green in the NIBA League Division 2 programme with the home team hoping to turn the tables and maintain their top position.