Lurgan A stretch their lead at the top of Division 2 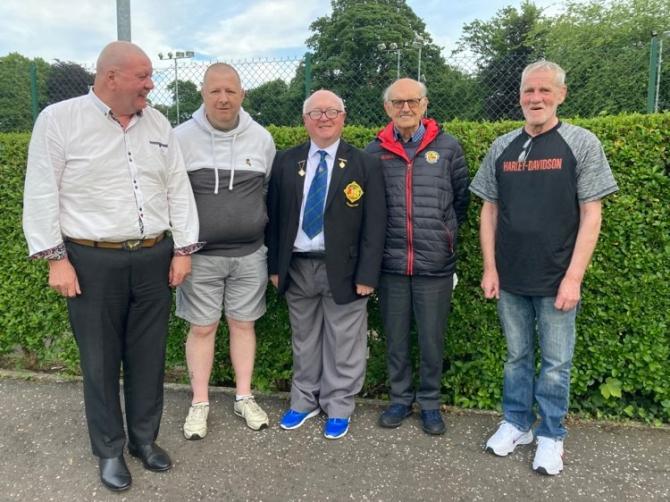 Thomas Hanna, NIBA President 2022, enjoying a chat with some Lurgan members during his recent Club visit.

Last Saturday Lurgan A entertained Dungannon and managed a comfortable 25-shot win to stretch their lead to nine points ahead of Curran A in NIBA Division 2 and to build on their outstanding successful season so far with ten wins and only one loss; ironically away to Dungannon.

Ivor Mitchell, Jeff McCullough, Alan Briggs and Ronan Cregan on Rink 1 got off to their usual slow start dropping six shots on the first end. After five ends, however, the sides were level and at the halfway stage the Lurgan rink had carved out a 19-9 lead. The Dungannon rink pulled a few shots back but the home rink ran out worthy 25-17 winners.

On Rink 2 Dick McCune, Luke Donaldson, Nigel Hamilton and John Gilliland faced Keith Wright’s rink in what was the tightest game of the afternoon with the lead changing hands frequently over the 21 ends.

At 11 ends the Lurgan four were 12-11 up but at 15 ends Dungannon led 15-16. Playing the last end Dungannon were two shots up and lying game until Nigel Hamilton played the perfect bowl to leave Lurgan with a winning lie at 21-20. The opposition skip was unable to change the head giving a well-earned victory to the Lurgan rink.

The in-form rink of Neil Sloan, Iain Ferguson, Peter Dew and Sam McCombes on Rink 3 wasted no time in building up a match winning lead and at 10 ends the score was 18-6. The Lurgan four took total command of the game and ran out fabulous 32-13 winners.

With a six-point victory Lurgan maintain their top of the table position heading into the holiday period. Lurgan A will be away to Whitehead B when the league resumes on Saturday 16th July. In the interim a number of Lurgan players will take part in the ever popular annual Bangor tournament.