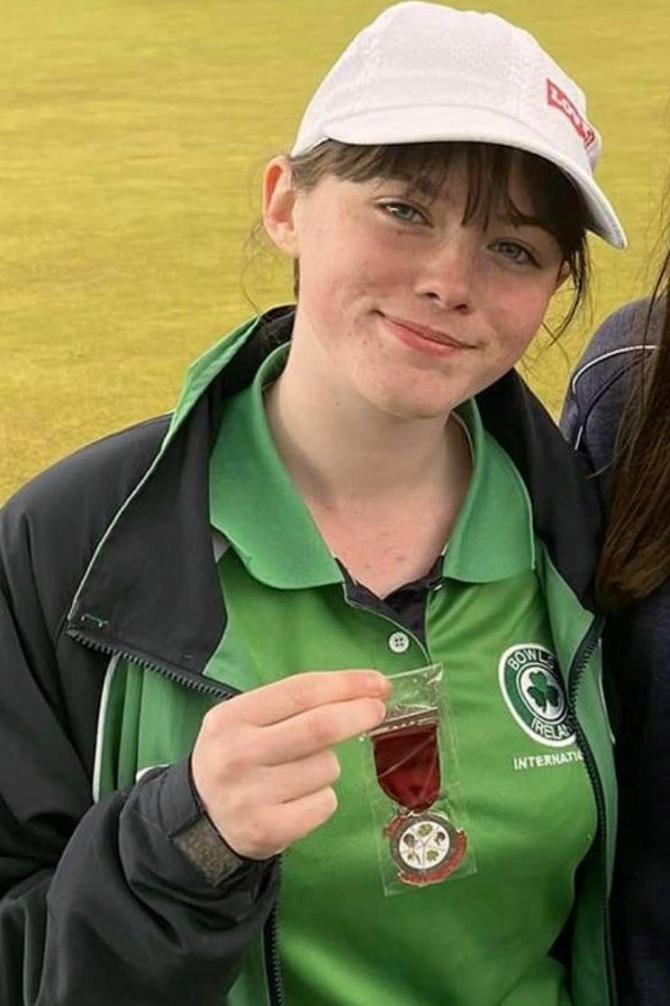 She was paired with Sophie McIntyre, Limavady to play in the Ladies U25 Pairs with bowling well to record a great 16-8 victory over Hayley Kenny and Jasamine Wilson, England.

Reflecting on the final against a strong Welsh pair, Lauren Gowen and Lowri Power, Mia said “it was quite unnerving at the start in front of a huge crowd of spectators around the green but we soon overcome that when we settled into our game.”

The final went very much in the Irish pairs favour for them to be 10 shots up at the halfway stage. Gowen and Power used the short length tactic to frustrate the Irish girls and took the match to 13 all going into the last end.

Mia and Sophie were unfortunate not at least to take the match to a tie end when they bowled two great shots into the head against the Welsh lying bowls with a measure for the second that ended in favour to the Welsh and Mia and Sophie losing by 1 shot and 16-15 to be runners-up in BIBC Ladies U25 Pairs Championship.

Along with the Irish group was Lurgan member, Dan Dempsey, Immediate IBA Past President who give his support to Mia Patterson throughout the tournament.

Mia is excited to have been selected to play for the Elite Irish Squad who will be taking part in an international tournament at the Gold Coast Bowls Complex in Western Australia from 12th – 21st November.

Lurgan’s President, Irene Cunningham and the Club members are delighted with Mia’s outstanding progress in the sport and wish her all the best for her Australian Trip.