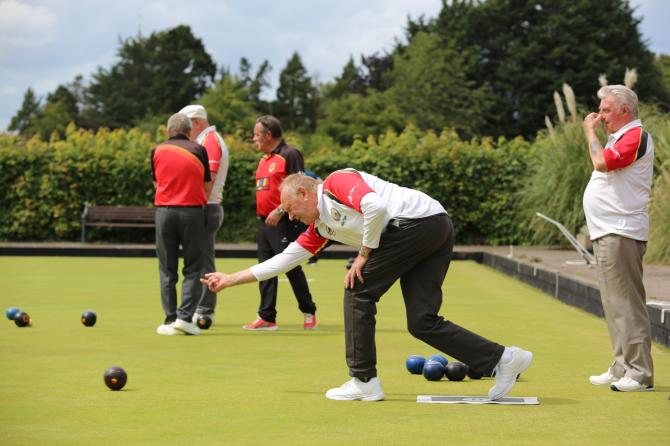 Mike Parr in action in a recent Veteran's League Match

Lurgan Four – Alan Briggs, Peter Dew, Ronan Cregan and Alan Roberts, Skip – met up at home with stout opposition provided by Robert Humphries’ Donaghadee rink last Tuesday evening in the NIBA Senior Fours Championship Quarter-finals that finished on a knife-edge with the Lurgan four winning in the end by 18-16.

The home four made a cautious start, coming from four shots down on the first end but delivered some fantastic bowls to square at 4-4 after the third end.

Ends were traded to be six all after the sixth end but over the next three ends the home four got the upper hand with Roberts driving brilliantly on the 9th to take the Donaghadee lying bowl out and claim two shots on the eighth end.

On the next end Roberts took the initiative again by drawing with his bowl to trail the jack for the Lurgan Four to go into a convincing 11-6 lead and went further ahead by 12-6 after the 11th end.

Over the following the next three ends Humphries’ urged his rink to get back into the match and so they did to the surprise of the home rink with the Donaghadee Four reducing Lurgan’s lead to 12-11 after 12 ends.

The 13th end went in Lurgan’s favour for them to increase their 14-11; followed by a brilliant shot edged in by Roberts to go further ahead by 15-11.

The Lurgan Four steadied themselves on the penultimate end with Peter Dew drawing his bowl to right behind the jack but then to be challenged by a close second from the Donaghadee third, Tommy Cheevers. Humphries was a whisker off the jack but went on through for Lurgan to hold for one shot – 16-16 and all to play for!

Another super bowl on the last end from Dew close on the jack with Donaghadee’s Maxwell bowling a close one again; followed by and excellent protective bowl from Lurgan’s Cregan and another excellent shot delivered by Roberts for the home rink to lie 2.

Humphries drove at the head twice in an effort to take the Lurgan lying bowls out of the head but failed to give the Lurgan Four for a place in the NIBA Senior Fours Championship Semi-finals against Tom Evans’ Antrim Rink during week commencing 15th August at a neutral venue.